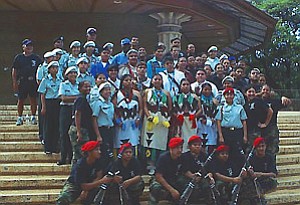 This trip was planned last school year by the Battalion Commander, Cadet LTC. Lauren Lomatska and the cadet staff. It took the cadets their whole summer vacation last year as well as the beginning of this school year to raise $15,000.

Fund-raising was a challenge for the cadets; they had to sacrifice their summer-breaks, free time, and weekends to raise money for their trip, but in the end, they all felt that it was worth the sacrifices they made. For this trip to work, cadets had to work together to create a group that was responsible for scheduling the concession dates during their fundraising efforts. All companies donated food items that were to be sold at various concessions.

It was not easy for the 32 cadets who had the privilege of going on this trip. They each had to write a five-page essay on a certain topic and brief it to the parents and cadets at the last meeting before they left for Hawaii. They also had to maintain a GPA of 2.5 or higher.

When it came time for the cadets to leave for Phoenix, parents hugged their cadets, and wished them a safe and happy trip.

The cadets were very excited to go to Hawaii, but the plane ride was a first for most of them. As they boarded the plane, cadets were very nervous about the takeoff. Gradually, they adjusted to being in flight, which lasted six hours from Phoenix to Hawaii.

As they arrived in 78-degree weather at Honolulu International Airport, cadets were relieved that they made a safe landing and were eager to start their tour of Honolulu. They were also very eager to meet the Waianae Junior ROTC cadets.

Currently, the University at Monoa has more than 20,000 students enrolled. This university is diverse with the students coming from different parts of the world. After Frazier's presentation, the cadets asked questions.

After the visit to the university, cadets traveled to downtown Honolulu, toward the state capitol. Cameras were snapping left to right, capturing the paradise that Hawaii possesses. They visited the palace of the first king of Hawaii. Outside the king's palace, they were asked to pose for the front cover of the "Crisis," a national monthly magazine.

Alphonso Braggs, the director of the Honolulu NAACP branch was the person responsible for inviting the group to Hawaii. He provided the Hopi group with a soulful African American cultural meal, which included catfish, red beans and rice, macaroni and cheese and some southern fried chicken. He called it an Aloha Meal and welcomed us to the island.

On Jan. 13, cadets visited Tripler Medical Center in Honolulu where they talked to senior veterans and shared in a Native cultural event. They performed a "Native corn planting ceremony" for the veterans in the garden located in the center. After this visit, they ventured to the Pearl Harbor Memorial where they saw the battleship USS Arizona. Following this tour, they went the 19th Annual Martin Luther King Jr. Holiday Banquet/Dinner and Dance. The director, Rev. Nelson Rivers, made sure that they were recognized, and asked them once again to pose for their magazine.

They all had a fabulous time getting to know each other's culture and the land where they live. The Hopi cadets also enjoyed the delicious food that the Wai'anae cadets provided for them, which consisted of a 450-pound roasted pig, rice, chow mien, eggrolls, salad, coconut gelatin, pineapple cake and poi with salmon. The Hopi cadet Parent Support Group made frybread to go with their meal. Cadets spent the rest of the day kayaking and playing on the beach with their newfound friends from Wai'anae.

Monday was the big day for the cadets. They cadets were well rested and ready for the three-mile-long march in the Dr. Martin Luther King Jr. Parade. Cadets were motivated by the applause received from many spectators. At the conclusion of the parade, the cadets rested for about 30 minutes and then went on to perform onstage dancing the Warrior Dance, which the cadets had practiced for the past two months. At the conclusion, the cadets received many comments telling them how well they performed and they were complimented on their costumes as well.

The Battalion Commander, Cadet LTC. Lauren Lomatska was very proud that she accomplished a goal few people thought would not happen. She was happy that everyone enjoyed the trip and was able to meet the academic requirements.

The Battalion Executive Officer, Cadet Major Jeremy Naha, said, "This is a once-in-a-lifetime experience and was really a fun and exciting trip, and I am glad that our battalion commander started planning for the trip."

Naha expressed his gratitude to all the people who donated as well as sacrificed their summer vacation to raise funds so that this trip could happen. He commended the battalion commander for not giving up on her dream and pushing everyone to make this dream a reality.

The Battalion Command Sergeant Major, Cadet, CSM. Ronisha Lopez commented, "This trip was the most fun, exciting, once-in-a-lifetime trip that I have ever taken."

All in all the cadets and chaperones enjoyed connected with the Native Hawaiians and can now see the similarities in each culture. They are now looking forward to the Hopi2Hawaii 08 projected for January 2008.