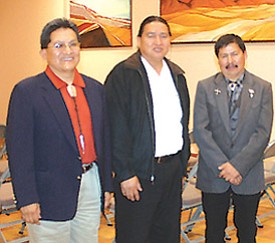 Hopi Tribal Chairman finalists at a candidates forum held at the Museum of Northern Arizona. Pictured from left are Ben Nuvamsa, Dr. Alan Numkena and Harry Nutumya. The forum was held to further discuss the strengths and ideas of each finalist (Photo by Rebecca Schubert/Observer).

FLAGSTAFF-Following the Hopi Special Elections Primary Election held Jan. 24, the pool of 12 candidates vying for Hopi Chairman was narrowed to two. Ben Nuvamsa of Shungopavi led the race with 274 votes, or 21.19 percent of the total vote while Harry Nutumya of Oravyi came in second with 168 votes, or 12.99 percent.

Timed perfectly in its ability to showcase the top two candidates was the most recent candidates forum held Jan. 25 at the Museum of Northern Arizona. Although only a modest number of people (approximately 20) were in attendance, the forum brought forward the strengths and ideas of each candidate. Also important was the ample time and opportunity afforded the audience members to ask pertinent questions.

(Editor's note: Due to space limitations, only a select number of questions and answers are included in the following text.)

The evening began with an introduction by each candidate in which personal history and political promise was shared.

Nuvamsa, 58, of the Hoon'wungwa (Bear Clan), described his enthusiasm in pursuing the Chairmanship to address the "deeply rooted problems" in the Hopi government and villages.

"Our constitution needs to be revamped completely, because it's really not usable," Nuvamsa explained. "Trying to incorporate our traditional ways of government with a Western form doesn't work well. I think we need to give the government back to the people."

Nuvamsa said the Hopi government needs to be refocused with the primary purpose being "for the people, by the people."

Nuvamsa also stressed the importance of maintaining tribal programs; creating new, affordable housing; and taking a stand for the Hopi people in regard to the reopening of the Mohave Generating Station and use of the Coconino and Navajo Aquifers for a coal/water slurry pipeline.

Nutumya of the Rabbit and Tobacco Clans explained his strengths in character. "I believe that if you have a vision, a foresight, a belief, and stand up for what you believe in is right...." Nutumya said.

Nutumya stressed the "lack of infrastructure and lack of development for the people," and said major progress needs to be taken throughout the Hopi villages to improve roads, establish street addresses for all homes, promote economic development and increase housing options.

Nutumya discussed the need to create comprehensive land use plans for Hopi lands; the need to provide jobs for college-educated Hopis; and a friendly, working relationship with the Navajo Nation.

The first question entailed an explanation of the candidate's plans for his first 30 days in office.

"We need to have a bottom-up approach, starting with the villages," Nuvamsa said.

He discussed the immediate need to reach out to Yu Weh Loo Pah Ki and Hopi peoples on the Hopi Partition Land. Nuvamsa described a systematic series of community meetings during which individuals could express their concerns about the government, types of economic development, traditional values, etc.

"I'd begin with a series of listening conferences in the villages at a grassroots level," Nuvamsa said. "We need to bring village representatives to these hearing conferences."

Nuvamsa said the Hopi government has become separated and hidden from the people, and that village representatives often have little contact with the village residents.

"We need to develop administrative systems where we make the Hopi tribe user-friendly. One of the first things we need to do is improve our image again," he said.

Nutumya explained his plan to unite the office of the Chairman with that of the Vice Chairman.

"Me and the Vice Chairman need to sit together to bring our offices together...to streamline budgets, consolidate budgets and combine staff," he said. Nutumya said that he and the Vice Chairman should develop a set of mutual goals and objectives, prioritize these and work collaboratively in the effort to make change.

"We need to set the stage now to make an effective government," Nutumya said.

When the forum was opened to questions from the audience, forum moderator Gloria Lomahaftewa explained that numerous prompts concerning candidates' opinions of the Peabody Coal operations, Black Mesa Mine, the Mohave Generating Station and the coal/water slurry line were submitted. Thus, the questions were combined and opened to the candidates.

"This is a sensitive issue," Nutumya said. "I've met with [Vernon Masayesva]; I've supported his efforts. I know a lot of people have spoken against it. We cannot continue to use this water for slurry. I have to honor what people have said."

Nutumya explained that other options exist such as a railroad to transport the coal. "We really need to seriously evaluate this," he said.

Nuvamsa had a similar response.

"This is a sensitive issue. Anytime you talk about water, it's sacred," Nuvamsa said. "People have spoken through our forums. They don't want A. They don't want B. They want C, which is no action."

Nuvamsa explained the intensity and great length of the recently-published Draft Environmental Impact Statement, and referred to decisions that have been made by Hopi council members and administrators without the consent of the Hopi people.

"I need to go back and see what secret agreements have been made," he said.

Nuvamsa said that the drainage of Hopi streams due to past and current local pumping is obvious, and that it cannot be increased. He then referenced his plan to thoroughly analyze the situation with the help of the Grand Canyon Trust and the Black Mesa Trust organizations.

In another question from the audience the individual asked: Many people feel that the Hopi Tribal Council has developed into an entity all to itself in which an attitude of "we" and "them" now exists. What would you do to change this?

Nuvamsa agreed that the Hopi Tribal Government is now an "empire and the villages are separate. The Tribal Council does not go out to villages to seek input."

He said that these barriers need to be broken down and that the Council members need to understand and work for the people.

Nutumya explained that "...the villages are autonomous and dictate for themselves. Our villages have become divided because of money issues. We need to give empowerments to villages once we pass a new constitution. We need to develop villages, set up infrastructure and business.... Once the new constitution is passed, Tribal Council will be at the mercy of the villages and they will have the opportunity to reject their representative."

Another audience member asked the candidates to address the issues of alcohol and drug abuse and domestic violence.

Nutumya said, "To get to the root of the problem, it all starts at home. We need to start in the villages. We need to really focus on how we could help our young people."

Nutumya explained that many people are discouraged and turn to alcohol, drugs and domestic violence due to the lack of jobs in villages, lack of education, lack of budgeting and investment skills. He said that each of these issues needs to be addressed at a village level. He also referred to the need to reinforce the police department and find funding to build a juvenile detention center.

Nuvamsa said that these problems develop at home and that is where solving the problems begins.

"We need to develop programs to address these issues that are culturally-relevant," Nuvamsa said. "We need to ask, 'What is it-our teachings. You as mother, as father, as grandfather-what is your role?"

Nuvamsa explained that programs need to be written that are based upon Hopi values.

In closing, each candidate had the opportunity to provide a concluding statement.

The final candidates forum will be held at 6:30 p.m., Monday, Feb. 5, at the Hopi Junior/Senior High School.

The General Election will be held Wednesday, Feb. 7. Additional information about the candidates may be obtained through www.HOPIpolitics.org, the website of Hopi Organizational Political Initiative (H.O.P.I., a small non-partisan group of Hopi & Tewa dedicated to bringing awareness of the issues and concerns to the Hopi and Tewa people).