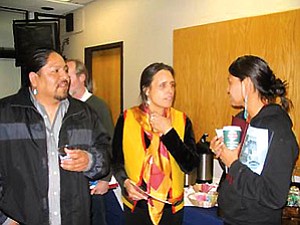 The Community Tribal Investment Workshop, assembled by the Flagstaff-based Just Transition Coalition, was an attempt in part to position the tribes to receive millions of dollars following the closure of the Mojave Generating Station. The workshop participants believe there is no better way to reinvest money from past coal operations than to build a renewable energy program.

By the end of the workshop, the group of approximately 50 participants had sketched plans for a task force to oversee the development of a multi-level renewable energy program for the reservations. The summit also yielded copious directives for the task force, ranging from the preservation of core cultural values to various legal, political and outreach strategies to use in building renewable energy programs.

Nationally recognized Native author Winona LaDuke participated in some of the breakout sessions following her own presentation and complimented the participants. "I'm going to support you as you go on," she said.

"We have a positive direction we can go. We're doing a good thing," said Andy Bessler, Southwest tribal partnership representative for the Sierra Club in Flagstaff. "Having something like this gives me hope that we can provide help...to make people's lives better. Renewable energy is a way to do that."

During the course of the workshop, participants attended several informational talks about the myriad intricacies of renewable energy policy. Among the presenters were Bob Gough, co-director of Native Wind; Winona LaDuke, program director of the Honor the Earth Fund; Dick Lowry, policy analyst at Sharp Solar; and Debby Tewa, Renewable and Tribal Energy coordinator for the Arizona Department of Commerce Energy Office. Following the presentations, workshop participants broke into various subgroups based on their expertise and interests in order to record their experiences and suggestions for the new task force.

The task force will be partly comprised of representatives from the groups that convened the workshop, including Northern Arizona University, the Just Transition Coalition, Grand Canyon Trust, Sierra Club, Black Mesa Water Coalition, Native Movement and the Natural Resource Defense Council. Its members will be charged to expand on the input from the workshop as it creates a detailed business proposal for renewable energy programs on northern Arizona's Indian reservations.

In part, such a plan will serve as a tool for justifying the acquisition of funds from the closure of the Mojave Generating Station. And when it's implemented, the plan could result in any number of scenarios for the buildout of Native renewable energy, from converting the generating station to a solar or wind-solar hybrid plant, to empowering rural reservation families to invest in small-scale renewable energy systems, to manufacturing sufficient sustainably-generated electricity to sell to nearby power grids, including Flagstaff's.

Participants were adamant that such a plan would incorporate tribal spiritual and community values, including honesty and sustained efforts to support and empower people at the levels of families and villages, as well as entire tribes.

Bessler acknowledged that it's an ambitious effort, but he mirrored the optimism of the rest of the participants when he said, "There's no road map. There's no blueprint. We're just doing it." The atmosphere of the summit was optimistic and charged, with many participants staying until the tail end of the talks at 5 p.m. on Friday.

Roger Clark, Air and Energy Program Director for the Grand Canyon Trust and Wahleah Johns of the Black Mesa Coalition made reference to the spiritual and cultural notion of planting seeds; in this case the seeds of renewable energy programs that will help sustain Arizona's tribes.

"We want to be in partnership," Johns said, "to share this food." For more information on the Just Transition Plan, log onto www.blackmesawatercoalition.org.