Tribal Day 2007 unites students and governments from across Arizona 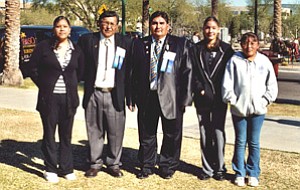 PHOENIX-Approximately 20 students from Hopi High School and Hopi Junior High School had a firsthand look at politics as they attended the 12th annual Indian Nations and Tribes Legislative Day Jan. 16 at the state capital. The students were from the schools' Gifted and Talented program.

The festivities included the Hopi Veterans posting the colors, the pledge of allegiance by Miss Navajo Jocelyn Billy and the opening prayer by White River Apache Chairman Ronnie Lupe.

Senate President Timothy Bee and Speaker of the House James Weiers welcomed the visitors into the crowded Senate building and talked about the need for more inclusiveness at the state legislature.

The theme for the day was Growing Stronger Together. The keynote speeches were given by Pascua Yaqui Chairwoman Herminia Frias, San Carlos Apache Chairman Wendsler Nosie and Arizona Commission of Indian Affairs Executive Director Kenneth Poocha, who is Hopi.

He also praised the schools for recently being recognized for making Adequate Yearly Progress.

Marshall Johnson, a junior at Hopi High, said it was interesting to see what the tribal and state legislators do.

Johnson said the gathering would have been better if the state legislators were more interactive with the visitors. He added that the best part was seeing how the legislators work.

"The most challenging part was deciphering their words," he said.

Kwaayson Onsae, also a junior at Hopi High, said the Arizona Tribal Legislative Day was interesting because she was able to see tribal leaders gather to discuss important issues.

"I enjoyed being in the presence of the tribal leaders," she said. "I enjoyed listening to them talk about what they have accomplished and what issues they are facing."

Onsae added that it was nice that Hopi Vice Chairman Todd Honyaoma Sr. was present and that several schools from Hopi were recognized.

Honyaoma said he was proud that students from Hopi High and Hopi Junior High were able to attend.