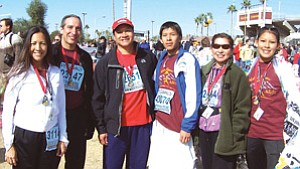 PHOENIX-"Work it baby, work it! Own it!" yelled a friend from the sidelines as I smiled and waved. I wasn't listening to an iPod. I wanted to experience all the sights and sounds of my first P.F. Chang's marathon - the bands, the cheerleaders, runners chatting, everything! I'd only run a couple of miles when I saw my friend and by then I had warmed up.

It was an unusually cool 29 degrees earlier that morning when I arrived at the start line. I darted into the warm Arizona Mining Museum where breakfast was being served. I thought back to last year when I simply covered the marathons held in mid-January every year. I remember at the time being envious of all the Native runners and thinking to myself, "I want to run in this!" Well here I was near the start line listening to the national anthem. I walked outside to cheer-on the marathoners who took off at 7:40 a.m.

I saw Andrea Noline in the pack. Noline is San Carlos Apache and Salt River Pima. I knew there were other "skins" in the race. I looked for the more than 100 Native runners in a crowd of 35,000. I took pictures of the few I bumped into including first-time half marathoner Dallas Massey, former Chairman of the White Mountain Apache Tribe. I asked what "corral" he was in? Runners are categorized in corrals by their estimated finish times. The lower the number of their corral, the better the runner. "I'm in Corral One," Massey said. "Wow, you're right up with there with the best runners!" I responded. "Well, I do eight minute miles in the 10K races I run in so I submitted my estimated race time based on that," Massey said with a smile. "I didn't realize a half marathon was 13 miles (like two 10K's)!"

The Native runners were easy to spot. Some of them I recognized from the night before at a pre-race dinner at Salt River High School. Those who gave speeches shared their personal stories of running to lose weight and fend off diabetes. The gathering gave us an opportunity to get to know one another. In the past, many simply nodded at each other. "Now we can give each other high fives!" said one runner. A few Native runners passed me in the half marathon including Michelle Tso (Navajo). She and her 18-year-old son Josh were among many Native families who participated in the race. Also in the crowd was former Miss Navajo Nation Karletta Chief and her two sisters. There were also husband and wife teams like Ken Josemaria and his wife Victoria from the Tohono O'odham Tribe.

Just minutes before the half marathon was to start, my good friend Radmilla Cody called me on my cell phone. Cody, also a former Miss Navajo Nation, was frantic. "I forgot my race number, what should I do? I have my chip and a copy of my check!" Chips are actual computer chips you tie on to your shoe, which keep track of your start and finish times. Cody was able to run and finished in 2 hours and 16 minutes. She only trained for two weeks! I trained for nearly six months and finished in 2 hours and 28 minutes. I guess that's not too bad!

As I ran the half marathon I thought of Marie Paul, an Aleut/Tlingit Indian, who was participating in her first half marathon in memory of her son, Mateo Sandoval. Paul, who works for Casino Arizona, was instrumental in securing funding from Casino Arizona for the pre-race dinner and "Native Runners" t-shirts. I promised everyone at the pre-race dinner I would organize drummers and traditional singers to set up along the route for next year.

I dedicated my first half marathon to Native youth and specifically to my three boys who were the inspiration for Native Youth Magazine online. It wasn't just a dedication. I prayed throughout the route for the well being of our future. I did this throughout my training. I prayed they would overcome the negative peer pressures many of them face daily, the pressure to do drugs, abuse alcohol, drop out of school, kill themselves, disrespect authority and so on. I also prayed for youth like Josh Tso, who refuses to follow the world and instead beckons the world to follow them and the great things they do. As a mother I've experienced the highs and lows of child rearing, especially through those trying teenage years. I persevered and continue to persevere with much prayer.

Midway through the marathon I became emotional. I didn't expect it. Perhaps it had something to do with physically reaching my goal to be in this race, mentally overcoming the challenges I faced launching Native Youth Magazine.com and spiritually growing through my prayers and reaching out to Native youth, some who simply want to be accepted and loved. I quickly re-focused on the race, however.

A few miles later I heard someone yell my name. It's exhilarating to hear people cheer for you. Of course the bands and cheerleaders along the route provide that added boost, but it's nothing like seeing people you know. I ran past an Apache woman and her children. I knew she was Apache because she was holding an Apache cradleboard. As I run by I'm reminded of my heritage and the Apache runners who've accomplished more than I by running full marathons including my mother Charlotte and late brother Darrell.

My mother called the day before the race. "Don't run today. You need to rest and eat pasta tonight," she advised. Little did I know she and my father were waiting at the finish line with a dozen roses. My husband, children and granddaughter were also waiting. I looked for them intently as I neared the finish line. My sister Millie who stood apart from the group was the only one who spotted me. I was thankful for her cheers but I envisioned so much more. I didn't want to carry my cell phone as I ran but I decided next year I'm running with my cell phone! I'll also carry a disposable camera to capture the memorable moments along the route.

One of the first runners I saw was Michelle Tso. She finished the half marathon in 2 hours and 5 minutes. "It felt good running past a lot of people," she said with a smile.

After chatting with other Native race finishers, I called Marie Paul. "I'm hurt. I have pain shooting up my leg," she said with a huff. "Oh no, where are you?" I replied. "I passed the 12 mile mark. I'm still walking. I'll be at the finish line soon," Paul said. She'd been walking now for more than 5 hours. Her goal was to intermittently walk and run. My sister, husband and I quickly walked to the finish line. We saw Marie limping toward us. We cheered as loudly as we could. I could tell she was in pain. I knew how important finishing was to her, especially as a mother. This race was for her late son. There was no way she was going to quit.

Many of us have our reasons for running. For some, it's simply to get in shape or stay in shape and fight off diseases like diabetes. For others, running is so much more. It's about our life journeys. We will run, walk, limp and even crawl across those finish lines as we deal with what life throws at us. It's also very much about our hopes for the future.