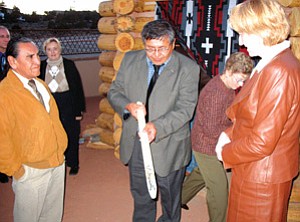 Navajo Nation Vice President Ben Shelly discusses the fire stick at the New Mexico Cancer Center’s ceremonial hogan with CEO Dr. Barbara McAneny. Patients will use the hogan in a blending of traditional and western medicine (Photo by George Hardeen).

The center is now open and is designed specifically with Native patients in mind. Run by New Mexico Oncology Hematology Consultants, the center is home to a specialized team of experienced professionals, technically superior equipment, state-of-the-art care, all in a culturally-appropriate and sensitive environment.

"We know these are not easy treatments," Dr. McAneny told the Vice President. "We know it's hard work to treat a cancer and to fix a cancer, and we want very much to smooth that path."

One of the ways the center plans to do that is by having a beautiful log hogan to be used by Navajo patients to blend traditional and western medical treatment. The center is committed to the integration of traditional healing practices in the treatment of cancer, she said.

McAneny said the center was designed and built with the patients' desires and concerns in mind.

"When we built this building and the other buildings, one of the things that we did is we asked the patients, 'what would make it easier for you?'," she said. "And they said we want it close; we want light; we want beauty; we want art; we want to be able to see outside the building; we want to remember all the beautiful things that we're fighting to live for."

This is the first radiation treatment center to serve Gallup and the nearby Navajo Nation, which will aid in keeping Navajo cancer patients and their families closer to home.

One of the main pieces of equipment shown to the Vice President was a state-of-the-art linear accelerator.

"This produces high energy X-rays, and is the standard piece of equipment used in radiation therapy treatment nationwide," Dr. Jeffrey Long explained. "This is so sophisticated that at least 98 to 99 percent of any patient's needs for radiation therapy can be served right here in Gallup."

The center will employ six staff members and be open five days a week, Long said.

"We're certainly prepared to handle very large volumes of patients if we need to," he said. "Our commitment to excellence and compassionate care is such that we will add staff very, very rapidly if necessary to cover the large increase in referrals over time."