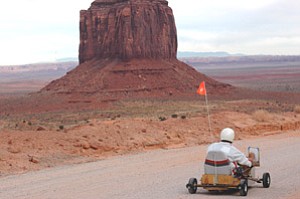 Navajo artist Steven Yazzie on location in Monument Valley during the filming of Draw Me a Picture in 2006 (Photo by Nicole Haas, courtesy of the Heard Museum).

PHOENIX-Venture on a wild ride through the isolated landscape of Monument Valley in the exhibition "Draw Me a Picture" by Navajo artist Steven Yazzie, opening Jan. 27.

For decades, Monument Valley was used as a backdrop in Hollywood westerns that negatively depicted American Indians. These films fed into a mythology of the American West in which Indians were either stoic noblemen or fierce savages. In "Draw Me A Picture," Yazzie challenges these stereotypes of Indian identity by re-envisioning this landscape from a fresh, alert vantage point.

From the driver's seat of a self-styled art car, Yazzie winds along a red dirt road into Monument Valley while simultaneously creating drawings-in-motion of the dramatic red rock formations passing by. Powered only by gravity, the art car is "part sculpture, part rolling studio" according to curator Joe Baker. "Fitted with an attached easel, [the car] allows the artist to be in motion while drawing the advancing landscape." The entire process is captured on film.

"Draw Me a Picture" shatters outmoded thinking about Indians by offering a new representation of this well-known American landscape. According to Baker, "through his actions and urgent drawings of Monument Valley, [Yazzie] reclaims this picture, making it his own by creating images that are free of expectations and stereotypical gestures of 'Indian-ness.' The final result is drawing that is alert to self, place, and time."

Filmed on a three-day trip to the Navajo Reservation in northern Arizona, "Draw me a Picture" is the latest work in Yazzie's "Drawing and Driving" series. This series, which investigates the artist's relationship to landscape, evolved during a 2006 summer artist residency at the renowned Skowhegan School of Painting and Sculpture in Maine.

The art car, along with original drawings and paintings and a large scale video projection of the 1925 silent film, The Vanishing American, will be on view during the opening. At 2 p.m. that day, don't miss a special gallery talk by Yazzie and Baker. The opening and talk are free with regular museum admission. The exhibition will be on view through August.

For more information and a behind the scenes look at the filming of "Draw Me a Picture,"visit www.heard.org and click "Upcoming Exhibitions " for a link to the artist's Web site.

"Draw Me a Picture" is generously sponsored by the Heard Museum Council.