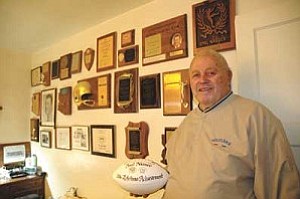 Emil Nasser holds his most recent football award for Lifetime Achievement from the National Football Foundation. His trophies in the background are testiment to him being one of most well respected coaches around.

Legendary former Winslow High School football coach Emil Nasser was honored by the National Football Foundation and College Hall of Fame, Inc. at a banquet in Phoenix on Dec 15.

At 85, Emil is the oldest active football coach in the state of Arizona, having been active as an assistant coach for the highly successful Joseph City Wildcats in recent years following his retirement from Winslow High School. He has been a full time or part time coach for 60 years, accumulating over 300 wins and over 20 conference or division championships. He has won over 40 awards for his coaching achievements.

Nasser has also been a certified Arizona Interscholastic Association (AIA) official for 35 years. He has officiated football, basketball and track during his career. He served as an AIA Regional Commissioner for five years. Nasser spent 36 years as head football coach at Winslow High School.