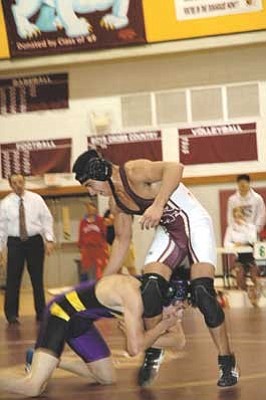 Marcus Tafoya of Winslow makes it up to the match for first place in the 135-pound division.

The Winslow Bulldogs wrestling team battled their way to an impressive second place finish in the Doc Wright Invitational Wrestling Meet held in Winslow on Friday and Saturday. The powerful 5A Mesa Jackrabbits won the meet for the fifth straight year with a total of 319 points. Winslow was second with 206, well ahead of third place Holbrook with 153. Gilbert finished fourth with 134 points and Chinle was fifth with 112 points. There were 22 schools entered in the tournament.

Justin Powell in the 215-pound division was the only Bulldog to finish third in a division.

Dillon Baker (125) and Michael Hernandez (160 did not place, but won four of their six matches. Trenton Ervin (103) and Victor Martinez (171) each won one of three matches.

The Winslow Bulldog wrestling team will entertain the Joseph City Wildcats, a small school power in the sport, tonight (Jan. 17) and enter the Page Invitational Tournament on Friday and Saturday.