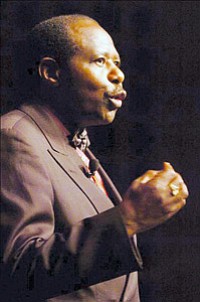 Paul Rusesabagina will speak at 10 a.m., Jan. 27, in Ardrey Auditorium at Northern Arizona University as part of a series of events focusing on human rights (Courtesy photo).

FLAGSTAFF-The man whose heroism inspired the movie Hotel Rwanda will discuss his story of humanity, courage, perseverance and hope at 10 a.m., Jan. 27, in Ardrey Auditorium at Northern Arizona University (NAU).

During the 1994 Rwandan genocide, Paul Rusesabagina was temporary manager of the Hotel Mille Collines in Kigali, Rwanda. Using his influence and connections, he protected more than 1,260 individuals from slaughter.

His lecture is sponsored by the NAU Martin Springer Institute, which invited him to speak on "Hotel Rwanda: A Lesson Yet to Be Learned" as part of International Holocaust Day.

"I've become a humanitarian, and I never thought I would become one," Rusesabagina said. "As a humanitarian, I wanted to take this message on a wider scale, to raise awareness of what happened in my country so that the international community can help others who suffer now."

Gretchen McAllister, director of the Martin Sprinter Institute, said Rusesabagina represents the common man. "He's individual who did not set out to make a difference or to save lives," she said. "But now he speaks out against genocide through sharing his story."

More than 900,000 Rwandans were killed during a period of about 100 days from April 6th through mid-July 1994. Although Rusesabagina's immediate family survived the genocide, his brother, mother-in-law, sister-in-law, and six nieces and nephews died. His father-in-law paid to be executed rather than suffer a more painful death.

Rusesabagina is the recipient of numerous prestigious awards, including the Presidential Medal of Freedom, the National Civil Rights Museum Freedom Award and the Peace Abbey Courage of Conscience Award.

Copies of Rusesabagina's autobiography, An Ordinary Man, will be available at a signing following the presentation.

For information about the speaker or the Martin Springer Institute visit apb.speakers.com, www4.nau.edu/msi/ or call 928-523-2464.

January 23: Focus on the Holocaust:

Jan. 27, 10 a.m.: Public talk and Book Signing at Cline Library Auditorium. Mr. Rusesabagina presents his talk, Hotel Rwanda: A Lesson Yet To Be Learned. Book signing at end of talk in the lobby.