Hopi Chairman forum held at the Museum of Northern Arizona 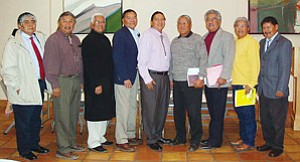 FLAGSTAFF-On Jan. 8, a candidates' forum was held at the Museum of Northern Arizona in preparation for the Hopi Tribe's upcoming Special Elections for Tribal Chairman. As of that day, seven candidates had been certified by the Election Board of the Hopi Tribe.

Qualifications for certification are: 25 years of age; Hopi Tribal member, fluent in the Hopi language and two year reservation residency prior to filing the petition for candidacy.

Four of the seven certified candidates attended the forum to present their platforms to the Hopi people residing in the Flagstaff area. The candidates were Valjean Joshevama Jr., Alan Numkena, Eljean Joshevama and Harry Nutumya. The three candidates unable to attend were Mary Felter, Mike Puhuyesva and Tommy Canyon.

The candidates addressed the issues of adopting a revised constitution, social issues and needs, housing shortage, education, water and coal, and leadership.

Six of the seven candidates awaiting certification were also in attendance at the forum. Before the end of the program, each candidate was provided an opportunity to introduce himself and state his platform.

Their certification for candidacy was to be completed by the Election Board on Jan. 11.

The forum was well attended with Hopi Flagstaff residents appreciating the opportunity to meet the candidates running for office.

A follow-up forum will be held at 6:30 p.m., Thursday, Jan. 25, at the Museum of Northern Arizona. This forum will allow Flagstaff area Hopi tribal members to better acquaint themselves with the two final Chairman candidates.

Additional information about the candidates may be obtained through the website of Hopi Organizational Political Initiative, www.HOPIpolitics.org.

The Special General Election for Chairman will be Wednesday, Feb. 7.