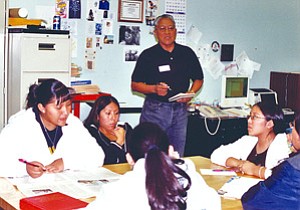 POLACCA-Hopi High School journalism students recently told Hopi tribal chairman candidate Elgean Joshevama that they are concerned about drugs, alcohol, teenage pregnancy and village politics. Joshevama asked to talk to the class so he could learn what the teenagers are concerned about.

Journalism student Emma Thompson said she is upset that some village leaders will say they don't want certain things going on, but won't say why.

Joshevama responded that sometimes people don't want to hear from the youth. He added that people say Hopi youth should learn their culture, but that this isn't always made easy for the youth and sometimes males aren't initiated until after they are married.

"That makes it harder for them because of the hardships that go with initiation," he said.

Bruin Times editor Sarah Duwyenie said the Hopi Reservation needs a substance abuse rehabilitation center. Thompson added that there are more opportunities and things to do in the larger cities.

Joshevama said the larger cities also have more resources to help people if they have a drug or alcohol problem. He emphasized that if somebody has an alcohol problem in the city that it's viewed as an illness, but on the Hopi Reservation it is viewed as a crime.

"Why the double standard?" he asked. "If you're [unfortunate] enough to get caught on Hopi then you end up in jail and have a record. That can ruin people's lives."

Joshevama said people in leadership positions, whether with the tribal council or the guidance center, are not addressing this issue.

Thompson said teen pregnancy is also an issue on the Hopi Reservation. Joshevama asked how parents could honestly share their thoughts with their children about teenage pregnancy.

Some of the students said there is a lack of activities on the Hopi Reservation. Joshevama said this is another issue that the tribe has failed to address.

Joshevama also questioned why candidates for chairman have to speak the Hopi language. "What is the main language we speak today? Tribal business is conducted in English," he said. "So, I'm puzzled we have those requirements. There may be somebody who's more qualified, but they don't speak Hopi."

Two students said that getting jobs on the Hopi Reservation can be a problem because favoritism is often given to relatives of the people in power. Joshevama replied, "You see that in the villages too often."

Thompson also added that some of the elderly talk about the youth in a bad way. "But we're not bad all the time," she said.

Joshevama said everybody is good, but sometimes people will behave badly.

Joshevama then criticized Polacca and Mishongnovi because their representatives to the tribal council are appointed and not elected.

"That's not good because the constitution is based on the democratic form of government," he said. "In a democracy you have the right to vote." Joshevama noted that Old Oraibi and Lower Moenkopi don't send representatives to the tribal council.

"Their leadership says they don't want representation, but that takes away my right to be represented," he said.