DEIS public meeting an emotional one in Leupp 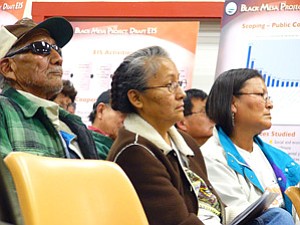 Woody Smith and daughters Irene and Juanita were among at least 70 individuals who attended the Black Mesa Project Draft Environmental Impact Statement public meeting on the evening of Jan. 9. Smith has frequently spoken out against the C-aquifer well field proposal that would take place in his community (Photo by S.J. Wilson/Observer).

LEUPP-Leupp community members concerned with C-aquifer water issues have spent most of January trying to get their voices heard in a series of public meetings held by the Office of Surface Mining (OSM) and other entities regarding the use of that water for slurry lines to transport coal to the Mohave Generating Station in Laughlin, Nev.

The meeting immediately started on a sour note, largely because of a general misunderstanding of its actual purpose. Many believed that the meeting afforded them the opportunity to speak out against the proposed Black Mesa project.

Richard Holbrook with OSM's Denver office explained that the purpose of these meetings are to obtain comments on the draft EIS to ensure that people were satisfied with the accuracy and scope of the instrument, and that all issues have been addressed in an adequate manner.

"We are here to cover all areas of concern. We are here to get your comments on this document," Holbrook said. He went on to explain how individuals could make their comments most effective.

"This is not a forum of 'I want the project' or 'I don't want the project,'" Holbrook said. "No decisions have been made. What this DEIS does is to describe what will happen if this alternative is used.

"We look at the environmental concerns...and [ensure] that the land is reclaimed to support its use before mining," Holbrook continued. "We have no jurisdiction over whether the project occurs."

That jurisdiction, Holbrook said, belongs to the BIA and the tribes, who must approve the use of C-aquifer water through a lease, and approve the right of way to build a pipeline from Leupp to Black Mesa. "President Shirley could approve this project tomorrow, without waiting for the final EIS," Holbrook said.

Holbrook assured Leupp residents that their community would suffer no relocation through the creation of the C-aquifer water delivery system, though there might be temporary disruption to road travel while crews construct roads to access the well fields. Holbrook added that area wells have been tested, and though some might be affected, water would be replaced either by drilling those wells deeper or replacing the wells completely.

Participants were advised to offer specific ideas of how to address a particular concern and to provide specific information about how a particular element of the project would affect them personally.

Further disruption erupted as chapter president Thomas Cody tried to allow the non-English speakers to listen to the taped presentation recorded in Navajo.

His pleas were misinterpreted by some to mean that the issue concerned only the elders in the audience. They insisted that the issue was more important to the children of the community who would have to deal with the results of any bad decision made now.

"I did not say that the DEIS or the Black Mesa Project will not affect the youth," Cody explained. "English-speaking individuals have copies of the DEIS and the Internet as a tool to help them understand the project. The elderly do not have that and deserve to hear the presentation in Navajo."

Holbrook won a measure of respect by accepting the community's request for a formal public hearing, where residents would be taped and their words transcribed. This format extended the meeting for over an additional hour-plus an additional meeting arranged for the Leupp community on Jan. 12 from noon to 4 p.m. to allow those individuals who would not travel after dark to have a chance to hear the presentation.

Though all had been apprised that this meeting was not designed to hear such statements, the residents of Leupp Chapter and surrounding communities made it clear that they did not approve of either Alternative A or B.

Velma Huskey, a resident of Birdsprings Chapter, shared her observation that the Navajo people would be seeing more negative impacts from either alternative. Alternative A, the preferred alternative, would approve the Life of Mine (LOM) revision. Kayenta and Black Mesa mining operations areas would be combined, and 13,529 total acres would be disturbed between 2006 and 2026. With this alternative, Black Mesa would see an increase in annual production from 4.8 to 6.2 million tons per year. A coal-washing facility would be included. This alternative would also approve a coal-slurry preparation plant permit, the reconstruction of the coal-slurry pipeline with realignments, and the construction of a C-aquifer water supply system (that would include tribal water supply capacity).

Alternative B would allow conditional approval of the LOM revision, combining a currently non-permitted area with the permanent program permit area (65,260 acres). A coal-hauling road using 127 acres of land would be constructed. Kayenta mining operations would continue, with 8,062 acres being disturbed between 2006 and 2026. Under this alternative, the Black Mesa mining operation would not resume, the coal-slurry preparation plant and coal-slurry pipeline would not be permitted, nor would a C-aquifer water-supply system that would allow larger pipes for tribal water usage.

"I look out at these people and I don't see it benefiting them. What are they getting out of this?" Huskey asked. "Most of the people who are here [at the meeting] are from this area. If we aren't getting anything from it, our answer is 'no!'"

Louise McCabe responded to Holbrook's earlier statement that President Shirley could make a decision on whether the Black Mesa Project would go forward before the final EIS was issued.

"You frighten me," McCabe stated, her voice trembling with emotion. "Don't tell me that [President] Shirley could make a decision on this tomorrow!"

She went on to list her own concerns, including a request that the final EIS examine whether the public utilities who own Mohave would still be entitled to C-aquifer water even if it wasn't used to slurry Black Mesa coal.

Floyd Nelson spoke about U.S. sovereignty issues, pointing out that the U.S. has power over who does or doesn't receive water.

"We use every drop of water before it hits Mexico," Nelson said. "Now Peabody comes to us to take water from the Navajo Nation to create power for larger cities. There are other communities like Flagstaff and Winslow who want water. What if they put in pipes [to take water from the aquifer] along with Peabody? You say that the C-aquifer can handle it. I don't think so."

Nelson passed on his wife's concern that Peabody wants to use potable water to slurry coal. He also shared her analysis that the project is a "done deal."

Guadalupe Branch rose to speak once again, accusing SRP, "the only shareholder," of using the EIS process as bait for other corporations.

"You come from your own area wanting to take our water. You're going to come to us to get drinking water [in the future]," Branch said. "I haven't heard anyone complain [about the shut down of the Peabody coal slurry] except the people who used to work there. You took six months to one year to conduct this study. There is no way you can predict Mother Nature-an ever-changing environment-in only six months."

The cooperating agencies in the Black Mesa Project are the Office of Surface Mining as lead agency, the Bureau of Indian Affairs, Bureau of Land Management, Bureau of Reclamation, the U.S. Environmental Protection Agency, the Forest Service, the Hopi, Navajo and Hualapai tribes as well as Mohave County and the City of Kingman.