C-aquifer committee a "no-show" in Leupp 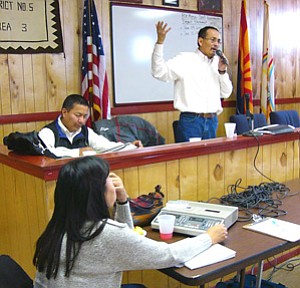 LEUPP-Members of the Leupp community gathered at the chapter house on Friday, Jan. 5 to hear a presentation from the C-aquifer committee of the Navajo Nation headed by Tuba City council delegate Hope MacDonald-Lonetree.

Some residents and guests had already attended one or more of the ongoing Black Mesa Project Draft Environmental Impact Statement (DEIS) hearings. The draft EIS is a 700+ page document outlining three proposed actions available to those interests seeking use of C-aquifer water as a source for the slurry of Peabody coal to the currently closed Mohave Generating Station, located about 273 miles from Black Mesa.

However, according to community members Calvin Johnson, Guadalupe "Pita" Branch and her mother, Ellen, these meetings are not being conducted in the appropriate format for indigenous people such as the Navajo and Hopi people.

"I spent the evening last night talking to representatives from the Salt River Project (SRP), Peabody Coal and the Office of Surface Mining (OSM), asking that the presentation be given in a town hall meeting format," Johnson said. "[Instead,] there are charts set up around the room, with a representative from the interest group responsible for that particular part standing there to explain their portion."

Johnson was also outraged that while the Kykotsmovi location was convenient for many Navajos, there was no presentation in the Navajo language, nor was a Navajo interpreter available to translate for Navajo speakers.

"They basically told us, 'go talk to that person,'" said Branch.

Members of the audience expressed and shared the opinion of Anna Frazier, a representative of Diné CARE that the EIS process is "backwards."

"[SRP] will not tell us who these other partners are. SRP says it has to be able to say that approval for the pipeline is in place before attracting partners. That is going backwards," Frazier told attendees.

Chee addressed a common selling point for project approval-that Navajo and Hopi people will be getting water.

"We hear that part of their plan (Option A) is that we will get water," Chee said. "The size of the pipe described in the [draft] is only big enough to carry water to the mine. The allowance of water to the Navajo and Hopi people is not covered in this study." However, according to one of the OSM poster presentations, Alternative A does allow for the construction of the C-aquifer water-supply system, including tribal water supply capacity.

The Leupp Chapter's official position is that the OSM select Option C, which includes disapproval of the Life of Mine (LOM) revision, as well as no construction of a new coal-slurry pipeline or C-aquifer water-supply system, and no coal-slurry preparation plant, fueling the passage of a chapter resolution against the proposed project to the Navajo Nation Council in December.

Branch rose to express her frustration from having attended the DEIS open meeting the night before in Kykotsmovi.

"When we asked representatives, 'Why use water?' [as a means of carrying coal], we were told that it is 'economically feasible.' What that [basically] means is that this...method...will make them the most money. When we asked another person [the same question], he just looked blankly back at us. When I asked [Dennis] Winterringer (of OSM) how he would feel if this kind of thing was happening in his backyard, he just looked at us."

Branch also said that she received two different answers to the same question from representatives of SRP and Peabody Coal. "This means they are lying to us," she charged.

Greg Long, another resident, warned attendees that the proponents of the plan relied on divisiveness to conquer them. "We have to be careful," he said.

Chee then interrupted the meeting briefly to announce that the C-aquifer subcommittee had called to inform him that they would be unable to attend the meeting due to weather. Instead, Chee said, the testimony of community members would be taken on tape and transcribed for delivery to the Navajo Nation Council.

Johnson expressed his dissatisfaction that the C-aquifer committee members had not come. "They should have been here, especially with the hearings so close," Johnson said. He shared that one woman, who presented in Navajo, asked why it was that a Navajo tribal newspaper reporter could make it through the weather all the way from Monument Valley and why couldn't the members have done the same.

Louise McCabe stated that the issue has affected her as well. "It affects you in...your mind and in your health," she stated, insisting that the council and President Joe Shirley say no to the proposed action.

Frazier repeated her concerns as voiced earlier in the meeting, adding that the Navajo people have environmental justice laws on their side.

Nicole Horseherder, a founding member of the group Tó Nizhoni Ani ("Beautiful Water Speaks") spoke of against the informal format of the public meetings.

"I feel this format is used to discourage public comment from the people," she said. "By now the entities involved should know that if they want the best results, they should do this in a style conducive to the results they want. We travel a long way to participate in these meetings, and we live in isolated areas. It's the only chance we get to hear each other [and] it's infuriating that the government continues to deal with us in this manner."

Horseherder attended the DEIS public meeting in Window Rock on Jan. 2 and was bothered that she recognized no one from the President or Vice President's offices, or council representatives.

"What's going on?" she asked. "Where's our leadership? For me this was a real eye-opener. Their absence showed me that they don't care. They showed me what side they're on, and that they aren't concerned about our welfare."

Horseherder also recognized that the OSM's role was to address what is happening within the boundaries of the lease area and proposed Canyon Diablo well fields.

"Who addresses the impact beyond the boundaries," Horseherder said. "The environment doesn't work that way. This DEIS is inadequate because it does not address the Diné people as a whole. Since the Black Mesa mine closure, what kind of economic shortfalls have the Navajo people suffered? I've seen none-all that is missing is the black cloud of pollution in the northern sky."

DEIS public meeting an emotional one in Leupp
Tensions run high at final Black Mesa DEIS hearing
Paving the way for the future: the Navajo/Hopi way or the Peabody way?
Organizations unite against Black Mesa DEIS
SRP and OSM: Quit playing games with Black Mesa, C-aquifer and end all the confusion!
Event Calendar