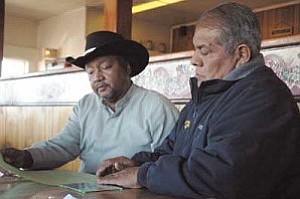 Former Hopi tribal chairman Ivan Sidney knows what the Blues are all about. But now he is going to spend some time relaxing, giving back to the community and helping his friends and neighbors; friends like Tommy Dukes and neighbors like Winslow.

Sidney met with Dukes for coffee down at the Falcon Restaurant in Winslow last week with some fliers he had just put together for a show he is organizing for the local Blues man out on the reservation.

The purpose of the show is to raise money to help pay for Dukes to drive out to Memphis, Tenn. for the International Blues Challenge, Feb. 1-3, where he'll be playing for a shot in the international spotlight.

"For a local Blues man to make it this far, is quite an accomplishment," Sidney said.

Since Dukes has spent years playing regionally for festivals up on the reservation and out on the airwaves of Hopi Radio KUYI 88.1 FM, Sidney said he would like to see people in Winslow and on the Rez come together to help Dukes out.

"He's been to our football games and goes out to our schools to speak," Sidney said. "People should realize we are not asking for handouts, but asking for a helping hand because for these years he has helped us out, and now we will help him."

Though he is a country western music man, Sidney said the Native American country fans are always at home in the crowd at a Blues show. Sidney is also a guitarist and plays with a band called the Hopi Clansmen, sponsoring the country western dance fund-raiser for Dukes. Desert Country, Restless Wind and Smoke Rings will also make special appearances.

After Sidney finishes with this fund-raiser, he said he plans on getting back to his work helping cancer victims and working to establish more drug and alcohol treatment centers on the reservation.

Sidney too is a cancer survivor, and for having survived that, said he has been more inspired; sometimes singing the Merle Haggard cover, "Sing me back home before I dieŠ"

It speaks of the love of the land on the high desert. Dukes has got one too ­ "The wind is blowin' through this old country shackŠ" goes his song about coming back to the country away from the problems of the city. This is something to which many in Winslow or on the reservation have said they can relate to.

"Just seeing someone from Arizona go to Memphis is an honor because he is representing me," Sidney said. "If I lived in Winslow, I would be very happy Dukes is putting Winslow on the map. Hopefully, there are people out there willing to help us help Tommy."

The country western dance fund-raiser to help send Tommy Dukes to the International Blues Festival will be held in Kootka Hall in Polacca on the Hopi Reservation on Jan. 12 from 8 p.m. until midnight. $5 per person. Raffle tickets for the event are available for $1 each can be purchased at the Winslow Mail office.

To get to the fund-raiser from Winslow: go north on Hwy. 87 to Second Mesa, then turn right on Hwy. 264; at about 8 miles near milepost 391, look for the old stone Polacca Day School, now Kootka Hall.

Those who would like to donate money to help Tommy Dukes go to Memphis, can make a check out to Tommy Dukes and give it to Eloise DeSpain, (928) 289-0736.