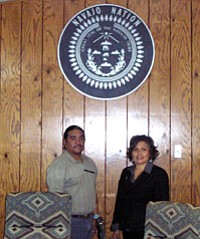 Since 1999, a small group of local community representatives recognized that there must be a central disaster control location as well as consistent, qualified personnel from the area to deal with disaster related services when an actual emergency arises.

Most disaster scenarios are immediate, sometimes life threatening and are often dangerous. In these situations, the local reservation area community's safety, health and well-being must be considered and addressed regardless of tribal orientation, economic or education status.

Since 1999, this smaller, local team has become extremely well-organized due to several forms of major disasters since 1999 to hit the Tuba City area, including this past year's freak tornado funnel cloud, which wreaked much physical structural damage in both Tuba City proper and Hopi Moencopi village areas.

This multi-partner agency has gotten so much attention locally in being able to respond quickly to property and people-related emergencies that two of its primary members were recently called before the Navajo Nation Council Safety Committee by Hope MacDonald-Lonetree, Safety Committee chairperson.

These individuals are Reggie Curry, a member of the Hopi tribe from Lower Mungapi, Tobacco clan, maintenance foreman of Tuba City District who also serves as the Tuba City Unified School District (TCUSD) safety officer, along with Shirley Peaches, who is the safety officer for Tuba City Regional Health Care Corporation in Tuba City. Both traveled to Window Rock on Dec. 11 to present the history and formation of the CRT team, and share with the Navajo Nation the recently adopted TCUSD Safety Booklet.

Peaches and Curry shared the TC-Moencopi CRT Team's plans for going after formal NIMS (National Incident Management Certification) during January 2007 for its entire team membership and also for finding a more direct way to get formal tribal "disaster" status declared at a local Tuba City-Moencopi villages area at a level that can address monetary and technical, equipment assistance from either the Hopi Tribe, the Navajo Nation and the Red Cross at the Arizona state level.

TCUSD's Safety Team member Curry said, "Mrs. Peaches and I went to Window Rock on behalf of our CRT team to reinforce what our Tuba City and Moencopi village community needs in terms of safety when a disaster hits. We shared with the Navajo Nation Safety Committee, our new TC District standardized safety booklet code, which was recently adopted by our TCUSD Governing Board as well as history of our team membership and its current participation and activities. The Navano Nation Safety Committee thought the TC District Safety Code booklet was an 'excellent model' that is directly reflective of our own personal needs at this local community level. Both Mrs. Peaches and I, along with our other team members are looking forward to going through the three-day training for NIMS certification in January, so that our team will be even better prepared for our community emergency needs."

TCRHCC's Safety Officer Peaches said, "Unfortunately, Tuba City and the Hopi villages located in Moencopi area have had a serious emergency every year since 1999, starting with the Y2K scare, so this team has really come a long way. Before, when we needed emergency assistance in these two community areas, we sometimes had to wait one-and-a-half days for either tribe to declare a formal "disaster status" because we had to go through several channels of tribal review before we could utilize monetary or support services. But we are hoping that with our NIMS certified formal representative through this TC-Moencopi team, we can make a direct request to either tribe, or the Red Cross for immediate disaster recognition and assistance. I, along with my team member, Mr. Curry, am looking forward to receiving this formal NIMS certification for our membership."

More information about the Tuba City-Moencopi Villages CRT Team from either Shirley Peaches, safety officer for Tuba City Regional Health Care Corporation at 928-283-2501 or Reggie Curry at TCUSD at 928-283-1166.