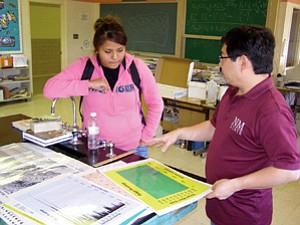 McKinley County Extension 4-H agent Richard Ng discusses the levels of radiation found at the Church Rock uranium spill site with Fort Wingate student Renee Cleveland. Cleveland, who participated in gathering the data while mapping the area, plans to use the information as a science project (Photo by Jane Moorman).

GALLUP, N.M.-How much radioactive contamination remains in the soil 27 years after a spill of tailings from a uranium mill's disposal pond? That was the question Fort Wingate High School students sought to answer when they began a mapping project last month.

The milling of uranium ore from nearby mines produced an acidic slurry of ground waste rock and fluid (tailings) that was pumped to disposal ponds. When the dam breached, 93 million gallons of tailings and pond water was released into Pipeline Canyon arroyo and the Rio Puerco. The dam was repaired shortly after its failure, according to a September 2003 U.S. Environmental Protection Agency (EPA) report. Cleanup of the spill was conducted according to criteria imposed by state and federal agencies at that time.

Since the closure of the milling operation in 1982, remediation efforts have been underway, but many people are still not aware of the danger the mill and tailings spill have left behind.

"We found several spots in the dam area that still have radioactive poison levels...hazardous to people's health," said Renee Cleveland, a student who is compiling the mapping data for her science fair project. Cleveland also plans to present this data to Church Rock community leaders.

"There are three or four houses around the mine area. People [still] live there despite the uranium spill. People know about the spill, but I don't think they know how bad it was. I want them to know the level of danger...in the area. The soil is contaminated, and when dust blows from that area, people can breathe the radioactive particles into their lungs, which can [eventually] lead to cancer."

Cleveland, a senior at the Bureau of Indian Affairs boarding school, says the GPS/GIS mapping project has increased her interest in a career in health science.

After a two-week training in the GPS and GIS programs by NMSU Extension 4-H agent Richard Ng and training with the Geiger counters by Mansel Nelson of Northern Arizona University (NAU) in Flagstaff, the students were ready to proceed with their mapping project. NAU provided the Geiger counters.

Students in Tish Sherrin's science careers class took Geiger counter readings at 369 spots from the former dam area and an area approximately five miles downstream. As each sample was taken, they marked the location with the GPS receiver. Later, they plotted the locations on an aerial photograph with the GIS computer program.

"The mapping program has brought science alive for our students," Sherrin said. "Our students are going to remember they used this equipment. [S]ome may find a career in this area of technology because of this Extension Service project."

"This program was developed in collaboration with the Environment Service Research Institution, which introduced the project concept to us," said Ng.

With the grant, Ng purchased 20 GPS receivers and computer software licenses for 25 computers.

"Our goal was to get the Native American youth interested in science, mathematics and technology," Ng said. "There is associate degree training available in the GPS technology and many career applications."

With that goal in mind, Ng and teachers at Fort Wingate, Ramah and Gallup high schools have introduced the state-of-the-art technology to 150 students.

The students at Fort Wingate participated in other projects besides the uranium spill mapping. The projects included plotting the locations of graves in the Fort Wingate Mexican War Cemetery, determining arroyo riparian conditions, mapping and addressing of homes in Fort Wingate and developing hiking trails in the McGaffey area.

Darnell Willie, a student participating in mapping the Fort Wingate houses, said he was surprised at all the ways GPS mapping can be used, especially by the fire and rescue services. As a high school senior, Willie said he would like to get more education in this area of technology.

Thomascina Becenciti, one of the students to create a hiking trail, said she learned that with a GPS receiver, "you can't get lost in the woods. The GPS tells you which way to go to reach your destination or starting point."

Sherrin plans to use the Extension Service program during the spring of 2007 to map soil conditions in areas where chemicals have been used to remove the non-native salt cedar. "We want to determine the extent of soil pollution and the affect on other vegetation in the area," she said. "We will take soil samples from various locations while recording the locations with the GPS."

"The students gave a presentation to the high school geography classes and presented the final product to the Ramah town hall," Ng said.

At Gallup High School, students mapped a hiking and mountain biking trail for the City of Gallup.

"When the students were told that they were doing projects for the greater good of the community, they took to the task at hand seriously and yet had fun because they were outside of the classroom conducting hands-on projects and applying what they had learned in the classroom," Ng said. "I think we introduced the students to many potential careers through these projects."