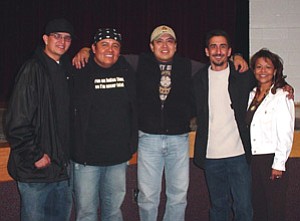 The film is a look into a life of a fictional reservation character in his early to mid-thirties. Cloyd, who is living in Kayenta, is married with a young son and battles with alcoholism and drug abuse. Throughout the movie he tries to find direction, clean up his act and become the family man that his wife and son need. He decides one day to make amends with his family, but has to fight a battle with what his conscience is telling him and the pressures he is facing from his so-called friends who still want him to return to his life of drinking and drug abuse.

The film shows a part of reservation life that many people don't like to focus attention upon. However, the filmmakers feel that through the film, viewers' eyes will be opened and reservation communities will begin to heal.

Nearly all who live on the reservations throughout the United States and Canada and even Mexico, have some part of the film that they can relate to or have personally experienced. This very idea-that the issues of substance abuse, family distress, and the complexity of forgiveness and making a positive change for the sake of your family are almost universal in any indigenous community-is how the De La Rosas felt the healing process could begin and through which change throughout Native communities could be stimulated.

Mile Post 398 boasted a large range of performances by both novice actors and professionally trained actors, several of whom are nationally known. These include Gerald Vandever, who is featured in such films as Black Cloud and Dark Wind, as well as James Junes and Ernest Tsosie III (better known as the Navajo comedy duo James and Ernie).

Mile Post 398 featured several new faces to the big screen such as KJ White, who was the youngest cast member on the Mile Post 398 set playing the son of the main character Cloyd. Billy Claw II also made his big screen debut as Cloyd's boss. Both White and Claw are local Kayenta residents and were not formally trained in the field of acting or theater.

All Mile Post 398 actors worked on the film on a strictly volunteer basis, and were on the production set for hours at a time. Nearly all members of the cast and crew have regular full-time jobs.

The all Navajo cast and crew filmed on the Navajo reservation, and did a majority of the filming near the actual highway marker of Mile Post 398, which is located near the Kayenta Township.

The film's score was contributed to by Aaron White, Coalition, and local promoter and artist, Yaiva, of 4th World Entertainment. Coalition is a blues/rock group from northern Arizona, who was also credited with providing some inspiration for the film.

The premiere of Mile Post 398 started with a performance by James and Ernie (who are also film cast members).

The evening was brought to a close with a brief question and answer session. This portion of the evening was a benefit to the audience who had various questions about the filmmaking process as well as other questions for the Mile Post 398 cast and crew.

Many of the people who spoke during the question and answer portion were very moved by the powerful script and felt that the film was a way to bring attention to the serious issues explored in the film.

"I hope this film can change the issues that affect our homeland," stated Christopher Barney, an audience member at the screening. Following the film, it was this sentiment that was echoed by the entire audience.

Mile Post 398 will not be available for purchase until the summer, but trailers and production photos are available on the producer's website at www.sheepheadfilms.com For more information about Sheephead Films and to request a screening in your community, please contact Shonie or Andee De La Rosa via email at sheepheadfilms@yahoo.com or by phone at 928-697-3033.

For information about Yaiva and 4th World Entertainment visit www.4went.com or email yaiva@4went.com or call 928-699-960.

For information about Coalition and their upcoming CD or performances please contact Tony at 928-606-4343 or visit www.coalitionrocks.net.