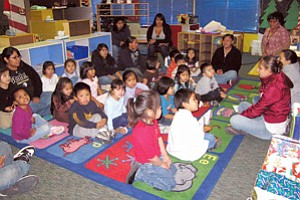 TUBA CITY-Carol Chee, director of the Tuba City School District's Child Development Center was able to celebrate a now decade old tradition of cross-cultural giving with her very young students at her preschool, courtesy of Loretta Jones, her children and grandchildren, who have contributed gifts of new toys and games for the past ten years to her child development center located at Tuba City High School.

Chee said that Mrs. Jones and her children had a foster Navajo child named Kathy Nez who prompted the first year of giving toys in 1996 to the first 23 preschool-aged children and have ever since wanted to continue this "special gifting" because it truly taught her own family the "true meaning of Christmas-extending the blessings her family has received to be given to others."

This year, Mrs. Jones came with her granddaughter Kylie Nez, and close family friend Cheryl Mousser and along with the new toys being distributed, treated the young students to some special story reading time.

Tuba City District's Child Development Center is the only preschool in Tuba City that serves a variety of students from the community which includes a cross cultural mix of Native and non-Native students and has participation from Tuba City High School Home Economics and Home Career programs.