Thou Home Occupation CUP will overfloweth with the land 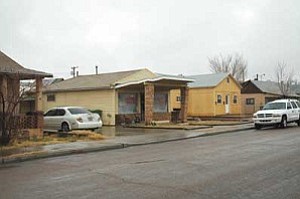 Two weeks ago, the City of Winslow Planning and Zoning presented its unanimously recommended actions on Home Occupations and Conditional Use Permits (CUP) to Winslow City Council and the Council adopted the proposed changes.

Before now, if any resident had a CUP for operating a business in a residential area then decided to sell or give the property away, the CUP status of the property would be withdrawn by the city. Anyone acquiring this same property, wishing to obtain a similar or different CUP would have to reapply to the City. Now, a CUP will remain with the property unless the owner decides to revoke that status, which can be done by making such a request to the City.

Planning and Zoning began looking at this subject earlier in 2006 after an accumulation of complaints from neighbors and with many businesses going on in homes, unbeknownst to the City.

Councilman Harold Soehner said he was uncomfortable with the strictness of this amendment and brought-up many complicated scenarios.

"I expect to see this become an issue sometime in the future," he said.

Ferris explained that the Planning and Zoning would review each scenario on an individual basis.

Class I Home Occupancies are businesses operating out of their primary residence, while Class II is other operations on the property. Ferris said Planning and Zoning decided to combine the two classes because of the narrow lot sizes in much of Winslow and they are concerned about the potential impact of businesses in operation too close to surrounding neighbors. Exemptions could be made depending on the case so long as it is determined there would be no adverse effects on the neighborhood, Ferris said.

Changes made to CUP ordinance will be to send all CUPs to Navajo County so the information may be put on record, and to attach a CUP to the property, not the owner.

"The purpose of this is so any prospective buyer will be notified of any CUP on a property next door," said City Attorney Dale Patton.

He also explained that keeping a CUP with the property could make a property more valuable because it would have more potential to a buyer.

Helen Jane Pollard approached the Council and said these changes to the zoning ordinances were unnecessary.

"Property ownership is the American Dream Šand the basis for our great nation," she said. "You will destroy property rights in the city of Winslow and of every individual property owner."

Pollard continued saying that zoning was instituted in Winslow to protect the rights of property owners and the value of their homes.

Next, Marie LaMar asked about a CUP being used by a tenant of a property with a CUP. Patton said that decision is up to the owner of the property.

"It there is a CUP next door, and things are not going well, then the neighbor can report that to planning office so they can investigate it," Patton said. "Then it can be brought before the Planning and Zoning Commission and they may revoke the CUP, depending on what is happening."

Patton said another concern that caused the planning department to want to attach CUPs to properties is because under the old system a property owner could give-up their CUP when selling the land.

The seller could offer a property with a CUP, but then if a buyer thought they could lose the CUP status, then they might be less inclined to buy, he said.

"If you want to keep the integrity of the neighborhoods then that is the way it needs to be," Howell said.

Another important issue, according to Patton, was that if a CUP was held and then given up by a property owner who sold the land, the new owner could claim discrimination against the city if the new and similar CUP was not given to them.

Ferris told Council that these amendments would make the city of Winslow in compliance with state laws and procedure, creating standard CUP submittal, approval, protests and appeals processes.