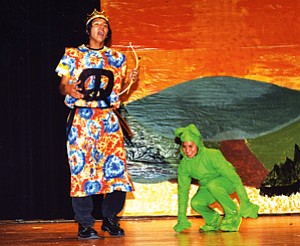 POLACCA - The Frog Princess was a hit according to the way the audience responded - with a lot of laughs.

The Hopi High drama class performed the comedy, which included dancing, Dec. 18 in the school's auditorium.

The performance was an adaptation of the classic children's tale, The Frog Princess, by Cathy Howard.

The storyline has the queen, played by Rachael Jim, ready to select one of her sons as a king after her husband dies.

Queen Jim puts her three sons through a test of who can marry the best woman. The first two sons marry women, the human type; the third son marries a frog.

The play was originally scheduled for Dec. 13, but was postponed until Dec. 18 due to a power outage.

Queen Jim said the play turned out well despite the change in performance dates.

"We prepared that day. We didn't think anybody would show up (because of the date change), but we had a decent amount of people," she said.

Jim said she liked the play because it had a lot of interaction with the audience.

"They interacted with us and they laughed at the right spots," she said.

Jim noted that the drama class met on Tuesdays and Thursdays throughout the school year to prepare the school play.

"Kudos to everybody in the performance because they did great," she said about her fellow thespians.

"I'm a loud person and drama allows me to use my personality in a positive way. I like being in front of a lot of people," she said. "It also helps keep me out of trouble."

Going into drama as a career is one option as she plans to study pre-law and psychology as well as drama at Arizona State University.

Jim has also served as manager of the football team, been active in the organization Truthful and the Breakfast Club. She also plays softball for the Lady Bruins.