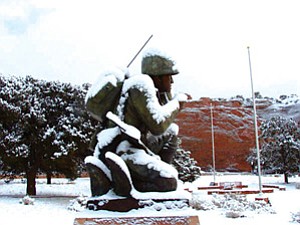 A statue in Window Rock that honors Navajo code talkers is shown in this photo provided by the Navajo Nation. The statue is the model for a planned memorial to Navajo code talkers in Wesley Bolin Plaza outside the State Capitol. The Senate Committee on Appropriations on Monday approved $100,000 for the monument, but some senators raised concerns about honoring Navajos above other American Indian tribes that had members serve as code talkers (Photo by Michael Smith, Courtesy of the Navajo Nation).

PHOENIX-The Senate Appropriations Committee approved $100,000 for a Navajo code talkers monument Feb. 20, although several senators said they have reservations about not honoring code talkers from other tribes.

Although he cast his vote in favor of the bill, Sen. Albert Hale, D-St. Michaels, a former president of the Navajo Nation, said lawmakers should address the question of expanding the monument to include other tribes.

"This is a well-intended bill, and it is high time recognition is given to a group whose language was utilized to win World War II," Hale said. "I would like to see a resolution expanding the honor to all Native American code talkers because they contributed also."

In a previous hearing on the bill, a leader of the Hopi Tribe told lawmakers the monument should honor all tribes that contributed code talkers, including the Hopi.

SB 1192 calls for $100,000 to be allocated for the monument to Navajo code talkers in Wesley Bolin Plaza outside the State Capitol. The bill requires the Navajo Nation to donate $100,000 before the state gives its portion.

"We couldn't quite manage more funds, but with the match from the Navajo Nation hopefully we can complete the project," Johnson said.

Laughter sponsored the 2003 legislation that called for the Navajo code talkers monument. Hale said he had "heartburn" over the fact that the state was requiring the Navajo Nation to contribute to the monument.

"How can one sovereign entity require another to make a donation?" Hale asked. "The problem is that the state is appropriating money for the Navajo Nation and messing with its budget."

A statement could be included that instead requests the Navajo Nation to come up with the money or that would allow others such as the Hopi Tribe to contribute, Hale said. If other tribes could donate money, Hale said, an argument could be made that the monument should honor Navajos and others.

"Now, with a mandate to the Navajos to fund the monument, it is properly titled the Navajo Code Talkers monument," Hale said.

The state does not usually give money for memorials, said Sen. Jorge Garcia, D-Tucson, who voted against the bill.

"The history has been that memorials are funded privately," Garcia said. "I don't want to get stuck with any number of requestors coming to us to make contributions for future memorials."