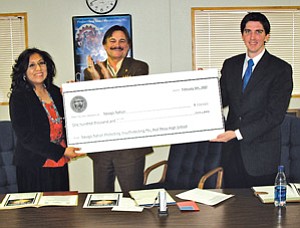 "Protecting You, Protecting Me" is an alcohol use prevention curriculum that trains high school students to teach elementary school children about the hazards of underage drinking.

"On behalf of the Red Mesa School District and the Navajo Nation, I accept this and want to say thank you to our mother, Janet Napolitano. She's been very supportive," said Shirley, who was accompanied by Martha Shelly, wife of Navajo Nation Vice President Ben Shelly.

The program was created by the national organization Mothers Against Drunk Driving (MADD). The Red Mesa School District program is the first on the Navajo Nation and is being funded through Arizona Gov. Janet Napolitano's Office for Children, Youth and Families.

"Protecting You, Protecting Me" is a community-based approach that gives state officials a better idea how to move forward across the state, Tate said.

"It's a curriculum that talks about health and how alcohol [affects] the body, for instance, how alcohol affects the brain, how it affects other organs like the liver, the heart, the lungs."

"Protecting You, Protecting Me" is designed to reach children before they have fully shaped their attitudes and opinions about alcohol use. The curriculum focuses on the effects of alcohol on the developing brain during the first 21 years of life.

The Red Mesa students who will be the first to take the course and teach younger children are Dustin Blackhat, Chantelle White, Irwin Lameman, Aason Alfred and Donovan Charley. They are all high school juniors.

Jess King, who has already begun to teach the course, said these students would in turn teach fourth and fifth graders about the dangers of underage drinking.

"Protecting You, Protecting Me" lessons reinforce the fact that the brains of children and adolescents are still maturing and respond to alcohol in a dramatically different way than it does in adults, putting children at a much higher risk. The curriculum provides a series of 40 lessons-eight lessons each for grades one through five.

The course will teach students about underage consumption of alcoholic beverages, vehicle-related risks, especially as passengers in vehicles in which the driver is not alcohol-free, the role and importance of the brain, its growth and development, the dangers of alcohol exposure to the developing brain, the importance of making good decisions, and how to become media literate.

In an interview with KRMH radio host Candace Wilson, Shirley said that "Protecting You, Protecting Me" has been shown to be an effective program.

"There's proven research that it does work because younger children look up to older children as their role models, and that's how this research was researched, put into place," she said. "That's a proven method of teaching."

The curriculum has been tested with more than 3,500 elementary school students in six states and Guam in three separate pilot tests using classroom teachers, high school students in a Peer Assistance and Leadership Program, and MADD staff and volunteers as presenters.

Research shows that the risk for alcohol and other drug use skyrockets when children enter the sixth grade, between the ages of 12 and 13. To be effective in preventing alcohol use by the teen years, peer helpers must reach out and educate children in grades one through five.

MADD's National Elementary School Project is a nationwide effort to prevent alcohol use by youth and "Protecting You, Protecting Me" is an important first step in the project, Shirly said. Shirley is on MADD's National Diversity Project Advisory Board.

"We selected Red Mesa because they really reached out to us," she said. "We're looking for those kinds of schools, those kinds of communities that are willing to reach out."