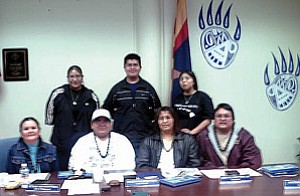 The Hopi Jr./Sr. High School Governing Board approved the trip in October of 2006, after the cadets gave a comprehensive presentation on the activities they were going to be doing in Hawaii. On Feb. 13, Cadet LTC Lauren Lomatska gave another effulgent presentation about what activities and beautiful things they had seen in Hawaii.

Cadet Major Jeremy Naha told them that the cadets had a lot of fun and the cadets were excited to meet new people from Hawaii and share their culture with the foods of Hawaii. He also told them how beautiful the island was with the ocean so wide and blue and filled with people surfing.

After giving the presentation, Cadet LTC Lomatska read heartwarming thank you letters sent from the N.A.A.C.P. President, Mr. Alphonso Braggs, as well as from the Athletic Director of the University of Hawaii, Herman Frazier.

While school board members watched the Powerpoint presentation in amazement, they were pleased to hear the letter writers were actually inviting the cadets to visit next year! They then presented the school board members with souvenirs they brought back from Hawaii, along with a "Kodak Moment" picture of the cadets posing with the Waianae High School JROTC cadets after their performances at Kapiolani Park.

At the close of the presentation, the school board members had many positive comments. They told the cadets how well they represented Hopi High school and the Hopi Tribe and how proud they made them with their trip to and from Hawaii. Valerie Kooyaquaptewa, governing board president said, "You have now started a trend that will go on forever, because your group did so well without incident." Dr. Reynolds, Hopi High Schools Superintendent said, "You did an outstanding job and broke the border line for other Hopi High school organizations to follow your lead."

The cadets thanked the school board for such a wonderful trip to Hawaii and also thanked them for their approval and making this "once-in-a-lifetime" trip become a reality, especially for the seniors involved.