Dance of the Warrior Mouse chosen for Sedona Film Festival 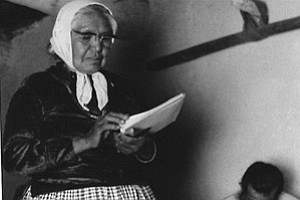 Roberta Blackgoat, Black Mesa Mine activist and inspiration for the film, "Dance of the Warrior Mouse," is depicted in one of her signature roles—reading and organizing information in regard to the mine (Photo courtesy of Susan Leslie Green).

SEDONA-Flagstaff student filmmaker Susan Leslie Green's documentary short, "Dance of the Warrior Mouse" was selected by the Sedona International Film Festival to screen in this year's film festival. As a graduate of the Zaki -Gordon Institute for Independent Filmmaking, Green said she is honored to have the opportunity to screen the film in the prestigious Sedona festival, which will be held Feb. 28 - March 4 at the Harkins Theatre Complex in Sedona.

"Dance of the Warrior Mouse is especially relevant at this time," she says. "The film introduces the amazing people that have persistently fought for our water through the last four decades." The short, 20-minute documentary tells the story of the Southwest deserts and the struggle to preserve the water resources.

"They never gave up." Green said. "Like the Hopi folktale of the little warrior mouse that drove away a marauding chicken hawk from his village, a handful of Hopi, Navajo and environmentalists managed to stop the use of drinking water to transport coal."

Green's film brings forward the fact that the disagreements between the Diné and Hopi peoples in what is known as the Bennett Freeze area are largely due to issues caused by the mining industry.

"They are only a few of the remarkable people who have dedicated their lives to bringing sustainable technologies to the Colorado Plateau; the same Colorado Plateau that the National Academy of Sciences designated a National Sacrifice Area."

"Their story deserves telling," Green said. "These are real heroes with real lives. Winning is unusual and very meaningful. I hope to develop the film into a feature length documentary that tells the entire story."

Green is currently finishing a master's degree in documentary film and digital storytelling at Prescott College.

The Sedona International Film Festival is an annual arts festival in support of independent and student films.

The DVD will be available for purchase at the festival and in selected Flagstaff stores including Winter Sun Trading on San Francisco Street.