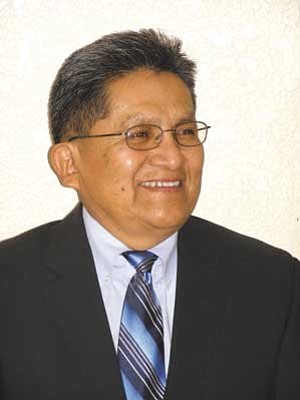 In all, 1,114 votes were cast, with every last one making a difference.

According to Hopi Elections Board representative and Tribal Registrar Karen Shupla when all of the villagers' votes were cast and counted, Nuvamsa lead by only two votes.

"It was really toe-tapping," Shupla said.

Then, the absentee ballots were added, and Nuvamsa took the clear lead.

Following the count, the contenders were notified by phone of the results.

Nuvamsa was in Shungopavi with his family/election committee when he received news of his victory.

We celebrated a little, and philosophized a little bit," Nuvamsa said. "They were all very positive and they knew we would prevail. It's time now to begin the healing processes."

According to the Hopi Vice Chairman's office, the date for Nuvamsa to be sworn in to office has not been set. However, he may take office on Feb. 26 when the Hopi Tribal Council resumes session. The date now hinges on the filing of necessary documents by the Hopi Elections Board.

Nuvamsa explained his intentions to begin his two-year term with a thorough discussion with the Council.

"We need to decide what's important and set our prioritiesŠwe need to work with the villages," he said.

When asked if the Council's priorities would be taken to the villages, Nuvamsa adamantly declared an alternative scenario.

"No, we will get the priorities from the villages. This is going to be a village driven approach. We're going to go to the grassroots level to begin formally setting the priorities," Nuvamsa explained.

He said that the Pots Kwa Niat (Hopi Council's Strategic Plan) has become outdated and needs to be evaluated.

Nuvamsa' priorities include bringing infrastructure to the Hopi people in the form of affordable housing, improved roads, water and sewer systems and land development.

"There are some villages that have land set aside for future development and we have to develop good land use planning for those areas," he said.

Nuvamsa discussed the need to evaluate the types of development and energy sources that could be established or furthered. He said incorporating alternative types of energy into the future of the Hopi communities is a vital possibility.

"We really have to look not only at the negative health issues of coal mining and uranium use, but how they affect traditional values," he said.

Nuvamsa also discussed his plans to meet the needs of the Spider Mound community east of Hopi, and to reach out to city governments in the region in order to serve Hopi people living in other off-reservation communities.

"They're our neighbors and we need to look at how we can become good partnersŠ provide health care and social care and layout what possibilities are there," he said.

In a separate conversation following the election, Nutumya explained his divergent intention of filing a challenge to Nuvamsa's chairmanship this week.

"At this time I'm working on a resolution item to nullify the election because of his residency requirements," Nutumya said. "We're just in the process of proofreading."

Nutumya said Nuvamsa has claimed to live in Hotevilla, but has "no proof."

He said that Nutumya has been living "Šin the Pinetop/Lakeside area. As I understand, he's been working as the superintendent at Fort Apache."

When asked whether or not Nutumya would support Nuvamsa's chairmanship he replied: "No, because he's starting off by deceiving and being dishonest with the people."

Nuvamsa explained that his residency requirement wasn't an issue.

"That was decided early in the process," he said.

Following Nuvamsa's filing for Chairmanship, formal petitions were filed refuting his residency. However, the Election Board consistently upheld their decision to qualify Nuvamsa.

Shupla confirmed Nuvamsa's qualification. "According to the Election Board, he was certified and they've stood by their decision," she said.

Nuvamsa said the allegations are a form of negative campaigning.

"It's really diverted the issue. It's a diversion tactic. The one key issue is who is best qualified," he said.

Nuvamsa explained his 34 years of federal service to Native peoples at the local, tribal, state and national levels, mainly as an agency superintendent for the Bureau of Indian Affairs (BIA).

"Even though there were some smear tactics in the final stages, we did not engage in that type of campaign. I've learnedŠyou don't do that. You don't engage in public debate, because you'll never win that battle. I've chosen to remain focused and address the issues," Nuvamsa said. "The Hopi people want a professional to be a good representative for the tribe."

He said his work as the lead negotiator for the BIA to implement the Indian Self-Determination [and Education Assistance Act of 1975] speaks of his commitment to Native people not only in Hopi, but throughout the U.S.

In all, approximately 25 percent of registered voters participated in this election. Official election results are as follows:

For more information about the election visit www.hopipolitics.org.