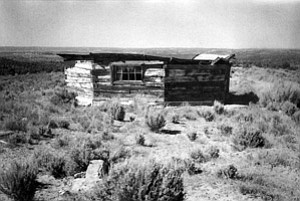 The devastation—an abandoned hogan on Big Mountain with the Black Mesa Coal mine in the distance (Photo and text by Serle L. Chapman, originally published in his 2001 work, We the People, Of Earth and Elders, Volume II).

PHOENIX-Salt River Project, a 20 percent owner of the Mohave Generating Station (MGS) in Laughlin, Nev., is ending efforts to return the plant to service.

After efforts failed to reach a purchase agreement with Southern California Edison (SCE), the majority owner and operator of MGS, SRP concluded that it will be unable to bring the facility back into service with the appropriate environmental emission controls in sufficient time to make it economically feasible.

"SRP is the last owner of Mohave to decide it is not worth running one of the West's biggest global warmer and dirtiest coal power plants, said Andy Bessler of Sierra Club's Environmental Partnership Program. "Now is the time for all parties to bring justice and a clean energy future to the Navajo and Hopi people through the Just Transition plan, a way forward that will bring a sustainable economy to Navajo and Hopi People through wind and solar energy development."

However, according to SRP, SCE may continue ongoing efforts to identify potential new buyers for Mohave.

The 1,580-megawatt plant has been shut down since Dec. 2005, pursuant to a consent decree following its lack of compliance with environmentally sound practices.

In June 2006, SCE and two other co-owners, Nevada Power Co. and the Los Angeles Department of Water and Power, announced they would no longer pursue a restart of the plant. In Sept. 2006, SRP announced its plans to seek a new ownership group to extend the life of Mohave.

SRP had formed a new ownership group that was prepared to complete a number of steps including, among others, the construction of approximately $750 million in additional pollution-control systems that would have significantly reduced emissions from the plant.

Other steps included the development of a new water supply system for the Black Mesa Coal Mine, located on the Navajo and Hopi Reservations in northeastern Arizona. A restart of Mohave would have extended the coal operations at the Black Mesa Mine until 2025, at a minimum.

SRP is the third-largest public power utility in the nation, providing electric service to more than 900,000 customers in the greater Phoenix metropolitan area.

For more information about the Just Transition Plan see related article below.