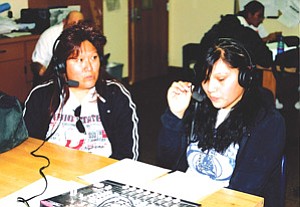 SHUNGOPAVI-Jessica Quamahongnewa has declared war against diabetes on the Hopi Reservation.

Quamahongnewa addressed the Hopi Jr/Sr High School Parent Advisory Committee (PAC) about diabetes during their monthly meeting Feb. 6 and then was interviewed on the Hopi High Teen Show Feb. 7 on KUYI.

Quamahongnewa, health activities aide for the Hopi Tribal Special Diabetes Program, said the main goal is to get kids to be more active. She said they want to have at least one restaurant on Hopi offer healthy choices on their menus and would pay for the cost of printing more menus.

Quamahongnewa said they want to start gardening projects at Hopi schools and for the elderly.

"The elders at Hotevilla are excited about combining a program with the elders and the youth. It's going back to our ways," she said.

"We want to beat diabetes because it causes blood pressure and heart disease," she said.

Quamahongnewa said child obesity has increased on Hopi and that children need more activity. She also said that one 10-year-old Hopi child has diabetes.

She noted that Hopi is above the national average for diabetes patients. The national average is 25 percent, but in 2002 the average on the Hopi Reservation was 55 percent. The good news is that in 2006 it decreased to 47 percent.

"Once you get diabetes it causes high blood pressure and heart problems. It also cuts off circulation to the feet," she said. "We have the power to beat diabetes, but we need healthy choices so we can enjoy life."

Quamahongnewa said there will be a running camp this summer and a running club will start in April.

Deborah Romero, coordinator for Families in Action for Futures for Children, told the PAC gathering that they have programs to help children.

Romero said some of their programs help parents get more involved with their children's education.

"We can be a resource for parents, school and community leaders," she said.

Romero said they also offer a friendship program where they match a student with their mentor.

Ivan Sidney, former school board president for Hopi Jr/Sr High School, said PAC needs to review what their mission is supposed to be. He said too often PAC seems to be used as a place to complain. He said if someone has a complaint that the school has a process to deal with it.

"PAC should be there to assist the school," he said.

Sidney noted that Russ Semore at Round Valley won the state's coach of the year award.

"But he left here because parents criticized him. PAC criticized why we brought people in from Ganado, but we have a good program," he said.

Sidney said the school needs another gym and he will work with corporations to see if funds could be donated toward that goal.

He said Hopi may want to reconsider whether its athletes should have a 2.0 grade point average in order to compete.