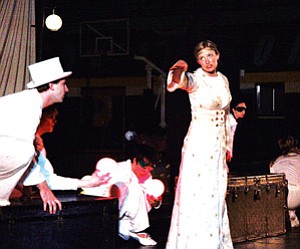 The tour which was sponsored by the National Endowment for the Arts is part of the Shakespeare in American Communities project.

The 2007 tour has traveled through Arizona, Utah, Colorado, Nevada with this special REZ presentation nearing the end of the tour, which ends in April of 07.

In its 75 minute presentation, the Utah theater group were able to present their version of "Midsummer Night's Dream" and also include a brief question and answer period after with both the actors and technical support for its traveling company.

The cast members are varied in their experience in this traveling theater, for some it is their first exposure to a professional road experience and for some of the others, this is just one in a string of other professional jobs they have in their backgrounds.