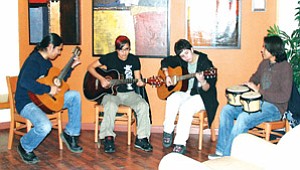 TUBA CITY-It has only been five and one-half months since Blair Quamahongnewa, member of the Hopi Tribe from Hotevilla Village, started teaching music at Tuba City High School but he has made such a creative impression at TC High and proven to be such a musical inspiration for his students, that several of his students from the fall semester's acoustical guitar class felt confident enough to try "jamming" at one of Tuba City newest public venues-the Hogan Coffee House located on Main Street in uptown Tuba.

Quamahongnewa, along with Chastity Begay from the Navajo Nation on guitar, Winona Manrique, Anglo/Puerto Rican on guitar, Jerel Nells, Navajo on the bongos and Jeremiah Greeson, Anglo on guitar, blended original jazz and blues-based compositions for a two hour presentation at the request of Terry Namingha, the manager of the Hogan Coffee House. The performance created a coffee house artistic atmosphere for both locals and visitors to the Tuba City area.

It was a standing-room-only presentation with local Hopi and Navajo adults and students along with tourists who dropped by from the Hogan Restaurant to hear and experience both Quamahongnewa and his gifted, first-time-in-a-public-arena students play confidently, all the while watching their mentor, Quamahongnewa remind them of chord changes and tempo modes.

Chastity Begay, sitting next to Quamahongnewa-sporting blazing red and blonde hair-created a large portion of the compositions that the quartet played that night.

Quamahongnewa said, "Chastity is extremely motivated, talented and continues to compose daily, sharing with me her newest inspired works, which have a solid musical foundation and show genuine creative promise. She is careful to understand chord choices that will work best with an acoustic base, this shows her maturing tastes in music and composition."

Students at Tuba City High School who are interested in learning how to play a musical instrument receive a foundation at the Tuba City Junior High School level when they are introduced to the basics by Morris Nesmith, the junior high school band and orchestra teacher.

Nesmith has been with Tuba City Unified School District for the past four years and has taken his junior high-aged band members to music camps and music competition winning several student music awards.

Quamahongnewa is able to take the foundations created by Nesmith a step further for his TC High students by providing insight into Native American theme and composition.

This music experience for Quamahongnewa was heightened as he worked this past fall with Raven Chacon-Navajo/Hispanic, also this year's Grand Canyon Music Festival's Native American Composer Apprenticeship Program artist in residence.

Quamahongnewa and Chacon are both successful, young Native musical artists in their own right, but each has motivated students in Tuba City and Mungapi areas to seriously consider music and writing professional compositions as a real career choice.

Namingha, also a member of the Hopi Tribe from Lower Mungapi, was excited by the crowd that gathered at his specialty coffee house that night. Sales were brisk as the coffee house also features homemade soups and desserts along with their specially-blended coffees, teas and smoothie drinks. The green chili stew was also hit among the visitors that night, since it was cold and drizzly outside. The warm atmosphere and original artwork that lines the Hogan Coffee House made an exciting first time venue for the TC High music students and their gifted mentor, Quamahongnewa.

For more information about the TC High Music Program, call the TC District Office of Public Relations at 928-283-1072.