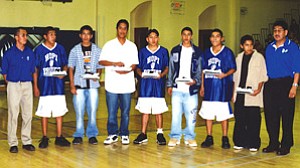 It was the 17th straight year that the Bruins won the state championship in boys cross-country-setting state and national records.

Vonn Secakuku, who has run on the state championship team for the past four years, said he was ecstatic and honored to receive the ring.

"It felt great to receive our first cross-country rings," he said. "The rings are pretty nice. I like that it has my name on it, that it mentions that we're state champions and that Hopi High has won it 17 years in a row."

Secakuku, a senior, said he is glad the team received the rings and the plaques because he thought his teammates deserved it.