U of A, Hopi Tribe mourn passing of Sekaquaptewa 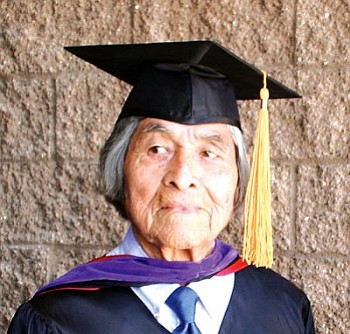 TUCSON-University of Arizona (UA) anthropologist Emory Sekaquaptewa spent a lifetime working to save his Hopi culture and language from extinction, a passion he pursued to the end.

Emory Sekaquaptewa, Hopi educator, judge, artist and cultural treasure as well as a noted research anthropologist at the UA's Bureau of Applied Research in Anthropology (BARA), died Dec. 14. Although his birth date was never recorded, he is believed to have been born in 1928 and celebrated his birthdays on Dec. 28.

Sekaquaptewa spent nearly four decades at UA, where he taught courses such as Hopi Language and Culture. His most notable academic achievement, however, was compiling and publishing the definitive dictionary of the Hopi language.

Born in Hotevilla in northern Arizona, Sekaquaptewa was the first Native American to attend West Point. He later graduated from Brigham Young University (BYU) in 1953. He spent two years as an Air Force officer before returning to Arizona to teach high school.

He and his brother Wayne in 1961 also started Hopicrafts, a silversmith shop where they developed innovative methods for producing silver overlay jewelry, the signature technique used by many Hopi artists.

Sekaquaptewa went on to serve as governor of Kykotsmovi and also with the Hopi Land Negotiating Committee in the 1960s during the tumultuous disputes over tribal lands between the Hopi and Navajo nations.

In 1970 he became the first member of the Hopi tribe to earn a law degree from UA, beginning his long association with the university. There are no records to indicate it, but his family said he was the first Native America to graduate from the UA with a juris doctorate.

From 1970 to 1990, he and Gordon Krutz were the UA's primary liaisons to Native American students and their families.

"Emory was an anchor for Hopi students who came here," Krutz said. "He was a symbol. He made himself available."

"He was an esteemed elder, teacher and mentor, was a (Hopi) Priesthood Society Member and remained active in all traditional Hopi matters throughout his entire life," said his wife, Mary Sekaquaptewa, in a written statement. "It is certain that Emory will be sorely missed by his adoring family and a multitude of ... friends, colleagues and students."

Sekaquaptewa spent his academic career preserving his native language and culture. He watched succeeding generations of Hopi lose touch with their language, in part he believed due to the introduction of television and radio and other modern influences in Hopi homes.

For decades at BARA, he cataloged Hopi words on index cards, assisted by Mary Black, Ken Hill and Sheilah Nicholas. A ten-year grant from the National Endowment for the Humanities (NEH) helped complete the research and publish the "Hopi Dictionary/Hopìikwa Lavàytutuveni: A Hopi-English Dictionary of the Third Mesa Dialect" in 1998 through UA Press. The dictionary contains about 30,000 entries, along with pronunciation guides.

The Society for the Study of the Indigenous Languages of the Americas gave its first Ken Hale Award to Sekaquaptewa in 2003 for his research. BARA Director Tim Finan called the dictionary an incredible achievement-one which "will certainly mark Emory's legacy."

Over the years, Sekaquaptewa served on the boards of the Hopi Education Endowment Fund (HEEF) Executive Committee and the Old Pueblo Archaeology Center, was a consultant to the Institute for the Preservation of the Original Languages of the Americas to help produce children's bilingual story books, hosted a segment for KUAT's "Our Journeys: American Indian Epics" and was a member of the Arizona State Historical Sites Review Committee.

Sekaquaptewa also assisted the Hopi over the contested use of reclaimed water at the Snowbowl ski area on the San Francisco Peaks and was working on the Hopi Murals Project at the Museum of Northern Arizona in Flagstaff.

His other awards include the 1989 Arizona Indian Living Treasure award, the BARA Lifetime Achievement Award in 2004 and most recently the Byron S. Cummings Award in August 2007 and the Heard Museum's Spirit of the Heard Award in October 2007.

Ironically, Sekaquaptewa sought none of these and other honors. His friends and colleagues remember him uniformly as self-effacing and dedicated to his family, colleagues and students. Friends often asked him whether he still drove his ancient, yellow Chevrolet sedan.

Sekaquaptewa taught his Hopi language course every spring in the UA anthropology department. Ken Hill and Mary Black said in a written statement that "the course attracted mainly Anglo students but over the years an increasing number of Hopi students would take the course and for them Emory provided special training in Hopi literacy."

"He held workshops at Hopi for teachers and through this as well as other initiatives Emory managed to get the Hopi language introduced into the Hopi schools," they wrote.

"At the time of his [passing], Emory was working on a Hopi children's word book, which couples colorful culturally relevant drawings and Hopi words, both as labels for the drawings and as used in simple sentences."

The work on the children's word book

forward. "I can't tell you how much Emory will be missed," said Ginny Healy, development director for the UA College of Social and Behavioral Sciences.

"When I first started working with him, he asked if he could take me and my family to Hopi," said Healy. "It remains one of the most memorable experiences of my life.

He was so passionate about his desire to preserve the Hopi language and culture that you couldn't help wanting to be a part of it.

A memorial service in Tucson will be announced at a later date. The family requests that in lieu of flowers, donations be made in his memory to the Hopi Children's Word Book Project, SBS Development Office, The University of Arizona, P.O. Box 210028, Tucson, AZ 85721.

For questions, please contact Maria Rodriguez at (520) 621-6285 or e-mail mariarod@email.arizona.edu.