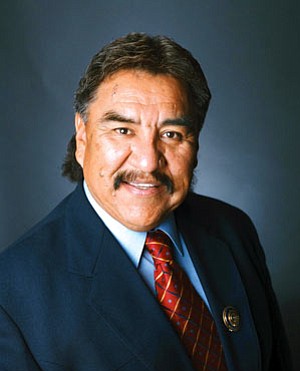 Legislation No. 0764-07 overrode President Shirley's veto of Navajo Nation Council Resolution No. CO-37-07 by a vote of 65-15. The override was sponsored by Speaker Lawrence T. Morgan (Iyanbito/ Pinedale) and involved the Navajo Government Development Act of 2007, which was initially approved by the Council on Oct. 16 with a vote of 62-19.

This legislation arose after several concerns were raised by Navajo Nation council delegates and members of the Intergovernmental Relations Committee (IGR) to address certain measures. The Council would like to refocus the operation of the Office of Navajo Government Development.

Speaker Morgan explained that the IGR contends that the office is ineffective and it is definitely a Council concern that needs immediate action.

The Council has no desire to abolish the office, but plans to focus on improving the department. The Office of Navajo Government Development was supposed to be the new catalyst for the tribe when it was established in 1989, but it never occurred. The Council has been funding this department for nearly 20 years.

Council Delegate Leonard Chee (Birdsprings/Leupp/Tolani Lake) said that "the amount of years and money that has been put into this office does not add up - there's been little progress in bringing government reform to our nation."

In other Council action, Legislation No. 0788-07 sponsored by Tom Lapahe (Tachee/Blue Gap/Whippoorwill) was passed by a vote of 69-14 and overrode a second veto by President Shirley.

Legislation No. 0689-07 sponsored by Speaker Morgan also passed by a vote of 79-1. This legislation relates to education and finance and amended the Navajo Nation 2008 fiscal year budget to appropriate $495,000 to the Dept. of Education's Bishop Optical 2007-2008 Eyeglass Project.

The initial supplement appropriation was $495,000, but additional legislation caused it to increase to a total of $3,604,400. These appropriations will be taken from the Unreserved-Undesignated Fund balance.

The total appropriations of just over $3.6 million will be used for direct services, which include funds for financial assistance to Navajo constituents through Council delegates, funds to assist Navajo constituents for financial hardship, funds for various emergencies, burial assistance, youth education, youth enrichment, and for contributions and sponsorships to various activities.

In addition, the 110 Navajo Nation chapters will receive a total of $844,400 in appropriation funds to be used for stipend payments for official meetings and $110,000 for Christmas activities at $1,000 per chapter. The funds are to be provided directly to the chapters as budgeted.

Council Delegate Leonard Tsosie (Pueblo Pintado/Torreon/Whitehorse Lake) spoke up against the additional appropriations and argued that this is the Navajo people's money and that we need to use it in a wise fashion and not as a Christmas gift.

"We are talking about eyeglasses for kids," Tsosie said. "We are hurting this legislation by adding these other items."

Delegate Young Jeff Tom (Mariano Lake/Smith Lake) responded to Tsosie by informing the Council that this money is greatly needed and is going to be used for direct services to the Navajo people.