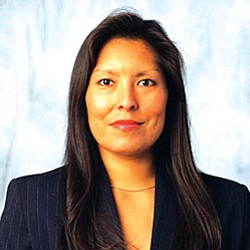 WASHINGTON D.C. - U.S. Senators John McCain (R-Ariz.) and Jon Kyl (R-Ariz.) on Dec. 14 hailed the confirmation of Diane J. Humetewa to the role of U.S. Attorney for Arizona. She will be the first Native American woman to serve in this role. She was confirmed late last Thursday by the Senate after waiting nearly a year to be confirmed by President Bush.

"Diane Humetewa will be an excellent U.S. Attorney for the District of Arizona. Her sound legal experience and expertise make her well suited to oversee the legal issues in the region," said Senator McCain. "She is an exceptional public servant, and I am pleased that she has been confirmed to serve the state of Arizona and our country."

"I congratulate Diane Humetewa on her confirmation today as the new U.S. Attorney for Arizona," said Senator Kyl. "Her background as a prosecutor, crime-victims advocate, and years of public service made her an outstanding nominee and will serve her well in this important position."

Humetewa now faces the daunting challenges of heading a financially-strapped district that has long been defined by immigration prosecutions and where federal charges of marijuana seizures of less than 500 pounds have not been prosecuted due to lack of personnel and funding.

Despite this, Gabriel "Jack" Chin, a professor at the University of Arizona's James E. Rogers College of Law, feels that Humetewa has enough experience to handle prosecutions on Indian reservations.