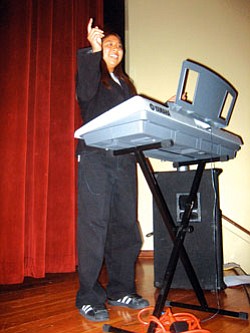 The plot was about a drama teacher who is missing because her assistant wants to be in charge so he hides her in his trunk. This results in nobody showing up for the rehearsals as the students improvise and put several plays into one.

Parts from Romeo and Juliet, Fiddler on the Roof, Scrooge and Shakespeare were reflected in this comedy.

Chelsea Nevayaktewa, who played several roles, said the play was "funnier than we thought."

"During rehearsals we messed around, but it came out better than we thought," she said. She is the daughter of Alfreda Poleahla and resides in Polacca.

Nevayaktewa said Hootsi Honyumptewa, Jake Yazzie and Leandra Calnimptewa were the standouts in the play, especially when Calnimptewa performed a rap number.

"It was fun so I'd like to do another comedy," she said.

This is Nevayaktewa's first time in drama, but she is considering taking drama classes in college. She is planning to attend Ft. Lewis College, Arizona State University or Eastern Arizona College to major in sports medicine.

Marshall Johnson was the main stage manager and Nona Edelson was the teacher/director.