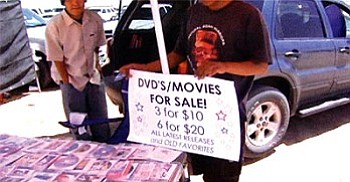 A still shot from a documentary by Andee and Shonie De La Rosa shows an unidentified Navajo man advertising the sale of illegally pirated copies of DVDs at a local flea market on the Navajo Reservation. The Navajo Nation is close to passing legislation which would make it illegal to copy and sell copyrighted CDs and DVDs of any kind on the Navajo Nation. If passed, this legislation will most likely be the first of its kind in Indian Country.

Across the Navajo Nation in stores, gas stations, and especially at roadside bazaars and markets, tables are stocked with duplicated music and copied movies. These "pirated" items come in two major forms: DVDs and CDs. The breadth and depth of variety of these items is boundless. From new releases and feature films to classics, independently made movies and every type of music imaginable, the merchants stock their tables with everything your heart desires.

Then, they hock their goods for low prices relying upon the volume of sales to thicken their wallets.

In the United States and abroad, the copy and sale of films and music is illegal and protected by copyright laws. But on the Navajo Nation (as well as numerous other reservations across North America) no such laws exist. Thus, the door is open for individuals to duplicate and sell the movies and music of others.

"I think the piracy is really taking a lot of the artistic point of view away," explained James Junes, Diné, of the James and Ernie comedy duo. "It kind of makes you feel like your own family doesn't have faith in you. I call it my family-the Navajo people. It's like-I poured my heart into this and they just don't believe in you. They just think, 'as long as I make my money,'" he said.

Ernest Tsosie III, Diné, who also starred in the recent film "Milepost 398" and other previous blockbusters shed another light on the subject.

"In particular with the James and Ernie comedy we've felt this. I have mixed feelings about it, and we've agonized about it-I mean, really searched to find a way to deal with it. Basically we decided that we have to give it over to God. We really said, 'for every DVD they sell, bless us back.' We've had to take a spiritual view about it," Tsosie said.

"For us, it's more than that. It's our own heart and soul," he said. "What's a bootlegger gonna get from it? Just money."

According to these artists as well as BLACKFIRE musicians Jeneda, Clayson and Klee Benally, Diné, film directors Andee and Shonie De LaRosa, Diné, and numerous others, the piracy of their works has had a significant impact on their sales and recognition.

Take 'James and Ernified,'" Junes said. "We almost made it to 10,000 [copies, which] would have been a milestone for us, but because of people stealing from us we never made it ..."

"It wouldn't be right if you just walked into a CD store and just took a CD off of the shelf," BLACKFIRE guitarist Klee Benally said. "That would be shoplifting and there are laws against that."

Leading the fight against CD/DVD piracy are producers/directors Andee and Shonie De La Rosa. The couple has released multiple films and documentaries detailing serious and compelling issues on the Navajo Nation. Their current project consists of a series of short documentaries available on YouTube investigating DVD and CD piracy on the Navajo Nation. Through interviews with musicians, comedians and actors the De La Rosas present the opinions and issues surrounding the issues, the effects of which they too have felt.

"We're using it in conjunction with the legislation that's going before the Navajo Nation Tribal Council, and they're going to try to put a law in place to ban piracy within the Navajo Nation," Andee said.

Yazzie explained the intricacies of the process.

"One of the delegates said, 'It's about time,'" Yazzie remembered. "There was a concern about the traditional music. So, based on that, we changed it so it will protect our traditional music. The most important part of this is to stop the illegal, unlawful recording of CDs, music and video."

Yazzie explained that the legislation goes hand in hand with the necessity of artists buying a copyright to their creations. This copyright in combination with the pending Navajo Nation Unauthorized Recording Act will make law enforcement possible.

"The key word here is that the artist needs to file their own copyright-that's the key point. So, for example, if I make a record and I want to copyright that, then I can file the proper paperwork. So, if an artist doesn't want to copyright their music, he or she doesn't have to," he said.

Yazzie approximated the copyright cost of one album between $100-150.

He said that by filing the original score and lyrics, they are protected from duplication and sale.

"If this artist who gets a copyright goes down to the flea market and finds his music, then legal actions can be taken," Yazzie said.

However, if the artist decides not to file a copyright, the legislation will not protect the individual's music or film.

Yazzie explained that part of his passion for passing the law is based upon his own music being sold.

"I fully support it because I'm an artist myself and when I found out three years ago that my CD was out for sale on the Internet and without my permission it was a big dent. It was also a lot of my own fellow musicians that alerted me as well," he said.

Yazzie said that he is unaware of any other Native American nations with copyright laws in place.

"I think it will be groundbreaking because there are a lot of our Native talents that are being exposed now, and of course, there's more to come," he said.

The next step for the legislation is to pass the Public Safety Committee. Then, if and when the legislation is presented to the entire Navajo Nation Council in January, the De La Rosa's piracy films will be screened before the delegates.

The De La Rosa's decided to create this series of short films and the push for legislation with the loss of sales felt through the duplication of their film Milepost 398. When they began to research the depth of this practice and how it was injuring hundreds of artists, they were compelled to take matters into their own hands.

"With all the films we saw at flea markets we didn't know. So we put our film out and not even a day later someone was bootleggin' it. Then we kept getting calls and e-mails from different places saying that people were bootlegging our movie and we said, 'what, how could they?' We just couldn't believe it. So, we went to different places and started checking for ourselves and right away one person said, "Well, I'm entitled to a cut of whatever you people make, because this is my story, too.' Then he turned around and told me that he had sold a hundred copies in the past hour for five bucks apiece," Andee remembered. "To me that was almost like someone breaking into your home and stealing something and turning around and selling it. I said, 'this is mine, and my husband and I worked so hard on this.' I couldn't believe that they would go and take it and not feel bad for taking something that we worked so hard for."

Shonie added, "It's like, no sacrifice or hard work on their part. They go ahead and make money off of something that we struggled to make. We cried and went through all kinds of hardships to make this and somebody just comes along and takes it, burns it and sells it."

Both of the De La Rosas maintain fulltime careers in addition to making films.

"Jobs are hard to come by on the rez' and it's hard to make a living and provide for your family, but just because its' hard doesn't give you a right to go out and steal," Shonie said. "And we've gotten mail from other people who say they deserved a cut, too, and to leave these bootleggers alone because they're trying to make ends meet," Andee said.

"It's like we've been there, but we've never stolen from anybody to say we're successful."

"Some of [the bootleggers] even have flat panel displays playin' their movies in the back of their trucks for people to watch and they're saying, 'oh, I'm barely getting' by. I'm just doing this to take care of my family." And there they are with the fully-loaded SUV or pickup truck with everything on it-22-inch rims, they're dressed in designer clothes and that and you're like, 'damn' I guess you're doing pretty good,'" Shonie said.

Junes added, "We have to speak up as artists. I want [the De La Rosa's piracy films] to be known to people so they know how I personally feel about these laws that are not in place yet on the Navajo Nation. It's about doing things the right way.

That's what we're taught from our elders is the values that we want to instill for our children. We as everyday people are gonna have to put our foot down and say, 'we're gonna be an example to our children ...I want to make this happen for myself and my family and to let people know that, 'hey, you're not only stealing from the artisans out there, but you're stealing from the very blessing that you've been given."

Junes said that piracy of James and Ernie comedy films has prevented the duo from releasing another picture. However, with the new Navajo Nation legislation pending, they are contemplating the development of another film.

To view the films visit: www.youtube.com/sheepheadfilms.