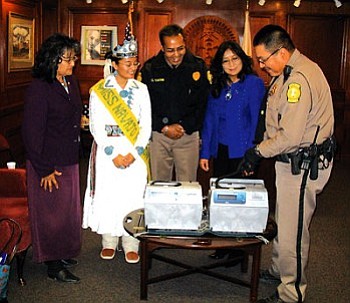 The two "Intoxilyzer 8000" units were made available to the Office of the First Lady through a grant from Arizona Attorney General Terry Goddard's office. Shirley said they will be used to help combat DWI.

The Intoxilyzer 8000 is an infrared spectrometry unit that is one of the most widely-accepted evidential forms of breath alcohol testing. More case law involves the use of IR instruments than any other non-invasive type of alcohol testing analysis.

She said the Intoxilyzers will support the mission of both the Navajo Nation DUI Task Force and the Mothers Against Drunk Drivers organization.

"Our mission is to stop drunk driving, to support the victims who have been affected by drunk driving, and also to prevent underage drinking," Shirley said.

She said she and President Shirley appreciate the work that Navajo police officers and the STEP team does on behalf of the Navajo Nation and Navajo people.

"I know that a lot of times you're out there on weekends, on evenings, away from your families, and I just want you to know that on behalf of President Shirley, on behalf of Vice President Shelly, the DUI Task Force, (Public Safety) Executive Director Samson Cowboy and NPD Chief Jim Benally, we're very happy to present these two machines to you."

Miss Navajo Nation Jonathea Tso said drunk driving is affecting families across Navajoland, and anything that can be done to reduce drunk driving should be.

"There's a lot of people out there who need help," she said. "It affects our people. It affects our families. I know people who have lost their elder grandparents, and their children are left alone thinking, 'why did this happen to us?'"

Use of the Intoxilyzer 8000 requires training provided by the Navajo Police Academy in Toyei, and many Navajo police officers have already received it.

"There should be two per district," said Dilkon Police Dept. Lt. Emerson Lee. "It doesn't make sense if you're way out in the field and running an offender back to the station. The service of the officers is really stretched out. This technology should be readily accessible."

"We're always looking for grants to get us more equipment for the officers," she said.

Currently, NPD has seven Intoxilyzer 5000 units. The Intoxilyzer 8000 is an improvement on those.

The premise of IR technology is that all things will absorb electromagnetic radiation in a unique and consistent manner. Alcohol has a unique molecular structure.

The bond between one atom and another establishes that substance's sensitivity to various wavelengths of electromagnetic radiation and, specifically, to infrared light energy.

Because no two substances have the same molecular structure, it is possible to detect a substance's presence due to the manner in which that substance will absorb the various wavelengths of the infrared spectrum.

The absorption, or "sensitivity," is caused by the resonating of the molecular bonds when exposed to the infrared energy. The IR energy is absorbed by these resonating bonds and is depleted.

Therefore, it is possible to measure the amount of energy that is used because of the unique and consistent manner in which it occurs. Because those bonds will resonate to different degrees at different wavelengths of IR light, a "fingerprint" of that substance's absorption, or sensitivity to those wavelengths, is created. That fingerprint is most commonly expressed in percent transmittance, which depicts the loss of IR light able to pass through the molecule. The more alcohol present, the greater the absorption.