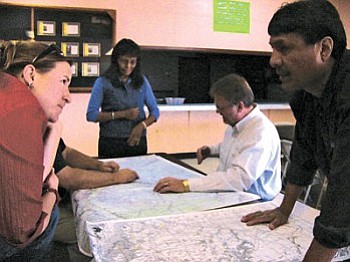 CAMERON - Initial study results indicate that a wind farm at Gray Mountain in the Cameron Chapter is feasible, but more data is needed before the project can be funded.

The wind farm study is in the land use and transportation planning stage.

The presenters unrolled large maps and discussed topics such as wind direction, bird nesting and bat migration as they waited for community members to arrive.

"Today, we want to get everyone caught up on where we've been and where we are going with the project," McAlvain said. "What is coming about is that the wind data is inconclusive. It doesn't tell us what we need to know. We need to put up more anemometers (devices used to measure wind force and velocity) to give us more information."

Navajo Tribal Utility Authority (NTUA) has had an anemometer on a 30-foot tower on Gray Mountain for over two years, Gilmore said.

"A little over two months ago, NTUA and NAU put up a 50-foot tower," Gilmore continued. "Five additional sites are ongoing at this time. We will be putting up 60-foot towers once the clearances and legal descriptions have been finished."

Steve Atkins explained that NAU had subcontracted with NTUA to facilitate the work on Gray Mountain.

Haller, an engineer with the American Wind Energy Association, serves as an advisor to the project. Haller said that the data gathered so far is inconclusive.

"With the wind data we have now, we couldn't get funding," Haller said. "Because of the complexity of the terrain, the direction of the wind and the shape of the land makes a difference on how much wind will blow on different parts of the mountain. But there is enough information saying there is a great opportunity here."

Haller pointed out that there are many factors that have caused utility companies to become aggressive, including aging power plants, global warming, environmental concerns, the Gulf Gulf War and now the war in Iraq.

Obtaining the data needed to attract funding will not be cheap, Haller pointed out, estimating that each tower would cost $20,000. In response to a community member's questions, ultimately a dozen such towers could be in operation at Gray Mountain, and the 2,000 people in the community would not be the direct recipients of energy produced on Gray Mountain. Instead, a vast amount of the electricity would be sold to Las Angeles, but the benefits of these sales would come back to the community, Haller said.

Chapter Vice President Jack Colorado pointed out that when land is disturbed, a company must have the approval of the chapter and the Division of Natural Resources.

"I wonder when the chapter gave approval to IPP and NAU to do this work?" The work Colorado referred to includes the raising of a tower and avian studies.

Atkins again repeated that NAU's work was facilitated through NTUA.

Janet Lynn explained that avian studies would assess the impact on birds and bats of wind energy development.

Should these assessments establish that birds and bats are being killed, the project could be stopped in its tracks, Lynn pointed out. These studies would show whether sites would need to be moved before any work took place.

Though there is little information available at Gray Mountain, Lynn said that one wind farm in particular had killed thousands of bats. The southwest is blessed with many different species of bats, so this would be an important consideration in this project.

"One bat can travel up to 250 miles in one night," Lynn said. "We learned this from bats in Marble Canyon who traveled to meadows at Kaibab to feed."

Gilmore and Ed Singer worked together to inspect five proposed sites for towers-each approximately one acre apiece-and found them clear of cultural or anthropological significance.

"We found nothing Navajo-related," Singer said. "These are not traditional or cultural properties ... There were no marked or unmarked graves."

Many areas are considered in the planning stage, including land use, orderly growth and development of transportation, open space and recreation. The impact of a project of this magnitude on the environment and community natural resources will also be considered. Benefits that Cameron Chapter residents could enjoy include neighborhood revitalization, zoning code development and social planning.

The improvement of roadways at NR6150 is an important part of the project-and would be a great benefit to the community, Gilmore pointed out.

Bill McCabe specializes in finding funding for feasibility studies in the energy field, and said that funding was out there.

"A resolution from the tribe or a recognized entity such as NTUA would be necessary," McCabe said. "If however the chapter was to become a recognized self-governing entity, that authority would open doors to direct access to funds on their own merit."

Marshall Johnson explained that the Just Transition Coalition (JTC) was made up of groups like his own To'Nizhoni Ani, the Grand Canyon Trust and the Sierra Club.

"We are looking at renewable energy so we can go clean. We [Navajo] have been giving away our coal and water-we've been giving raw materials away for royalties, and none of the energy came back to the reservation," Johnson said.

Johnson pointed out that renewable energy efforts like the proposed wind farm at Cameron could bring money back to the reservation.

"We could work here at home and have healthy families," Johnson said. "The California Power Utility Commission could do something more beneficial that what has happened over the last 45 to 50 years. I think it's a good thing that is happening here. If we can get the administration to listen, we can have that happen here."

Gilmore ended the meeting by pointing out that young people on the reservation are in favor of renewable energy, and the proposed wind farm would also provide jobs at home.

"We don't use our community resources to help generate new resources," Gilmore said. "Everything is all related on the Navajo Nation. If we work in unity, we can accomplish a lot-like when our elders returned form Ft. Sumner. They worked together then. A young man in Flagstaff related renewable energy to the Warrior Twins and their search for their father, the Sun, to obtain weapons to fight the monsters. We are going back to solar and wind for weapons to battle global warming."