Students prove they 'CanBuild' to feed the hungry 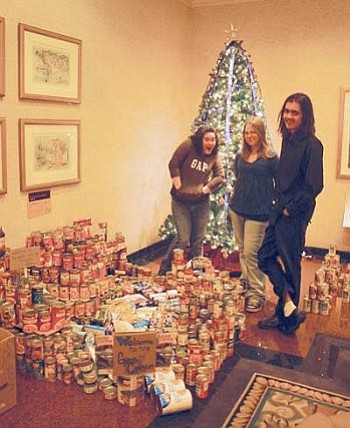 A work of art made entirely of stacked canned goods? Who would do such a thing? Flagstaff high school students-that's who.

Following the can collection, which concluded Nov. 28, a group of students from each school designed and built a six-by-six foot sculpture with their cans.

"So, for instance, last year one of the schools built a Christmas tree with a train set and then put presents under the tree made out of cans," Fisher said. "This year we involved five of the area high schools and hope to increase that every year with more and more schools participating."

"Every school that participates receives at least a $100-cash award plus a plaque. There are two big awards and those are for the best in show, for the best sculpture, and that will be voted on by our members. The other award is for the most cans collected, which is called the Big Can Award," Fisher said.

At the end of the construction period, Flagstaff High School students, earned the 2007 Best in Show with their castle of cans. According to students, the designers used medieval construction techniques to create the plan.

Fisher explained that NABA initiated the competition to express its appreciation for the community.

"We felt like this was something that the Building Association could tie in what we do with giving to the community and also the schools-it's kind of a win-win for both the community and the schools," she said. "This year we have a total can count of 12,644; so that's a huge amount of food that will stay within the Flagstaff community and be distributed to those who need it."

Fisher also highlighted the fact that the construction element of the competition parallels the home building focus of the association.

"It's the ingenuity, imagination and the whole sustainability type of sentiment. We provide shelter throughout the year-and you know there are two basic needs, food and shelter-and this is our opportunity to do more of the food end of that," Fisher said. "We do pride ourselves on being a community organization, and so we do want to do things that can contribute to the community in some way and this is one of our big ways and we're hoping to just get bigger and bigger. Next year we're hoping to involve more schools maybe at the middle school level even."