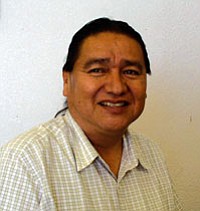 FLAGSTAFF-Cecilia Owen, Coconino County Superintendent of Schools, is pleased to announce that Dr. Alan Numkena has been appointed to the Tuba City Unified School District (TCUSD) Governing Board.

A District Advisory Committee interviewed candidates for the open board seat and made their recommendation to Superintendent Owen.

Numkena was sworn in Nov. 28 by Superintendent Owen at the District Administrative Center.

Numkena is a lifelong resident of the village of Moenkopi and presently serves as the Lt. Governor for Moenkopi Village.

He has practiced chiropractic family care in Arizona since 1976 and has served as vice president for two years on the Tuba City Regional Health Care Corporation Board of Directors.

He has a keen interest and involvement in education feels strongly that the TCSD must "provide quality education with the highest standards for our children."

Owen thanks all interested parties, applicants and citizens within Tuba City Unified School District who provided assistance during the selection process.