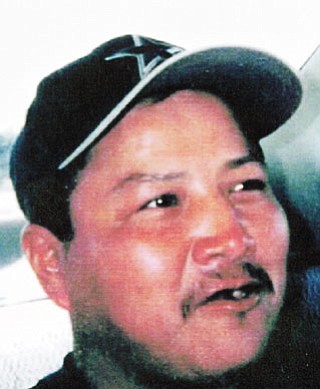 McClellan left his home near Cameron on Nov. 25 and was believed to be en route to his sheep camp, located 13 miles west of North Highway 89 on the Spider Web Ranch Road. On Nov. 26 McClellan's nephew located him in Gray Mountain, drove him to the Spider Web Ranch Road and dropped him off. It is believed that McClellan was given a ride to his camp.

According to witnesses who were present at the camp, McClellan was suffering from a severe illness, was hallucinating and believed someone was chasing him. On Nov. 29 he left the camp during a severe winter storm with a mixture of snow, rain and heavy winds. McClellan has not been seen or heard from since. He suffers from high blood pressure and is on medication. Searchers located his jacket with his blood pressure medication in the pocket. It is believed he has not taken his medication for at least four days.

McClellan is described as a 43-year-old Navajo Native American male, approximately 5'7" in height, weighing approximately 175 pounds. He has black hair that hangs over his collar and ears and a black moustache. He may have a slight growth of facial hair or a beard. McClellan has an injured right knee; however, it is unknown if he walks with a limp. He was last seen wearing a blue and white Dallas Cowboy ball cap with a star on the front of it, the rest of his clothing description is unknown. The search effort includes the DPS helicopter, four officers on horseback, 10 ground searchers either walking or riding ATVs and numerous family members who are assisting.

Community members with information regarding the disappearance or whereabouts of McClellan are urged to call the Coconino County Sheriff's office at (928) 774-4523.