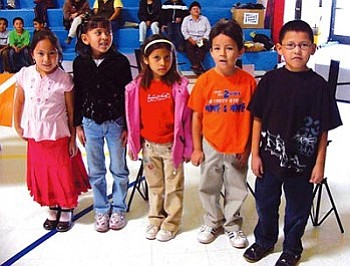 BIRDSPRINGS - The day before Thanksgiving will hereafter be known as Benny Singer Day at Little Singer Community School. This declaration honors Singer for the many contributions he and his family have made to Little Singer Community School (LSCS)-including the establishment of the school itself and donation of land so that the children of Birdsprings can remain at home while receiving an education. Before the establishment of the community school, many youth lived in boarding schools away from their families.

Dignitaries from across the Navajo Nation gathered in the LSCS gymnasium Nov. 21 to honor Singer.

Birdsprings Chapter Delegate Thomas Walker Jr. served as emcee for the event. He welcomed visitors to the community and thanked everyone for coming. Melvin Tsosie, the school's athletic director, offered the opening prayer. Student Martinez Wagoner led the Pledge of Allegiance in Navajo, and staff member Paul Joe sang a veteran honor song.

LCSC school board president Ray Curley gave the welcoming address. "I hope this will be an annual tradition," he said.

Walker recognized the efforts of the school board.

"They are the ones who suggested this event," Walker said. "I want to recognize those who contribute to the quality of the school."

Five first grade students stood to deliver a poem they had written for Singer.

"Thank you for your help," the poem read in part. "Thank you for bringing our children home. Thank you, everyone else who helped."

The children then played "Mary Had a Little Lamb" and "Hot Cross Buns" on the recorder.

Walker said that it was important to look at the Nation's vision of the future of education.

"Our children are our most important resource," Walker said.

"We are always saying that as parents, we are our children's first teachers," said Andy Ayze, chairman of the Navajo Nation Council of Education Committee.

Clinton Jim, executive assistant to the Offices of the Navajo Nation President and Vice President, described the day as very special.

"This is an appropriate time for this day," Jim said. "We Navajo are thankful for everything. We are thankful to our children-it's not easy to be a young person [in today's world]."

"Never forget your parents and your grandparents. Remember what they've done for you, and respect them," he added.

Jim advised students to not just see their parents as "pieces of furniture" in the home, but as people who have made sacrifices and given them love.

Of Singer, Jim said that without his wife and family, the school would not exist.

"There is support from families here," Jim continued. "You have individuals here [in Birdsprings] who are leaders. I was asked to come today, and did not hesitate. I wanted to see you again. By clanship, Tódích'íi'nii (Bitter Water), my father's clan, I have a lot of family members here."

After some good-natured teasing directed towards various family members, Jim went on to remind attendees to be thankful for the leadership they enjoyed from within the community and in Window Rock.

Dr. Mark Sorensen, who served as director of the school for 14 years, spoke of his appreciation for Benny Singer.

"I got a lot of good advice from this man on some very difficult issues," Sorensen said.

Evelyn McCabe introduced the junior high students, who gifted Singer with a food box, including warm socks and gloves, Spam and other favorites. McCabe explained that the students were strengthening their self-identities through the Voices curriculum in use at the school-and looked on proudly as each student introduced him and herself in Navajo to Singer.

The students sang a song written and performed by Navajo singer Jay Begaye, "Grandfather's Teaching," and then read a poem that any Navajo could appreciate, "The Sheep Herder."

Singer recognized the honor bestowed upon him by his community, the staff and administration at LSCS and the students who look to him as a grandfather at the school. He thanked the many dignitaries who came to share the morning with him.

Following the presentation, a delicious Thanksgiving-style dinner was served to the dignitaries and other visitors to the school.