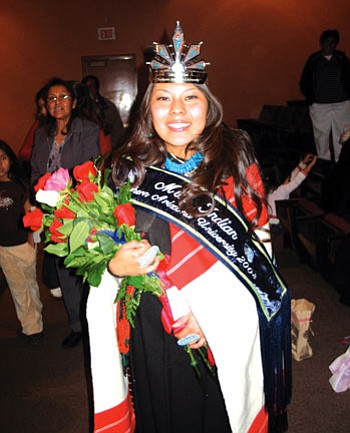 FLAGSTAFF-The Miss Indian NAU pageant was one of the events held as part of the Native American Heritage month. The pageant was held at the Cline Library on the campus of Northern Arizona University (NAU) Nov. 29. Entertainment was provided by the Native American Church of NAU, a newly formed student organization on campus. When the night was over, Marissa Navakuku, Hopi, from First Mesa was crowned the new Miss Indian NAU.

As a student ambassador at NAU and in the surrounding communities, Navakuku is now responsible for helping to promote cultural awareness and understanding of tribal/Indigenous nations; supporting and representing Native American student organizations; and participating in programs and activities to strengthen recruitment and retention efforts of students.

Navakuku is expected to fulfill these goals and objectives with cultural pride, dignity and honor and serve as a role model and leader. Therefore she must be honest, respectful, cooperative and diplomatic and must demonstrate leadership, communication skills, professionalism and good work ethics at all times.

The selection of Miss Indian NAU was made on the basis of the contestant's knowledge and awareness of Native American culture, history, and government, as well as communicative skills and style, professional presentation and personality conveyed and expressed during the pageant. Contestants were required to participate in all categories, which included a formal essay, two personal interviews with the Pageant Committee, evening gown competition, public speaking, traditional outfit and talent, and a three minute impromptu question.

Other contestants included Diné junior Andrea Yazzie, a 20-year-old from Aztec, N.M. Yazzie is a hotel/restaurant management major. When asked why she decided to run for Miss Indian NAU, her response was, "I thought it would be a good experience for me. I heard it was fun and you can do all these events and be a part of the community and most importantly to be a good leader."

The next contestant was Joni Pino, a junior from Twin Lakes, N.M. Pino is Diné and is majoring in elementary education with a minor in sociology. Her reasons for running for Miss Indian NAU were that she was a former high school princess. It makes her proud to be Native American and to represent Native Americans on campus. This has been her dream since she was a freshman. She says that even though she doesn't get the title today, she has many other chances like the Gallup Ceremonial.

First Attendant Glennasba Bizahloni Augborne, Diné/African American, won a sash, gifts, and $1,000 scholarship ($500 for spring 2008 and $500 for fall 2008). Augborne currently resides in Whittier, Calif. She is a 19-year-old sophomore majoring in political science with a minor in criminal justice. She decided to run for Miss Indian NAU because she wants stronger community involvement. "I would represent Miss Indian NAU the way it should be represented and stress education," she said.

Navakuku, the newly crowned Miss NAU is from Sichomovi. She is a community health/nursing major. She decided to run for Miss Indian NAU because she wanted to promote education on campus and let people know there are Native Americans on campus.

Rosanna Jumbo, Diné, is a senior from Chinle majoring in construction management with a minor in business and community design. She is highly involved with many organizations on campus, including educating and mentoring young students. She is a coach and is the vice-president of the Native American Business Organization (NABO) and president of the National Association of Women in Construction. She was chosen as Miss Congeniality during the pageant.

To run for Miss NAU, students must be 18-29 years of age, female, single, never married, without children, and an enrolled member of a federally recognized Native American/Native Alaskan/Hawaiian Native tribe or nation; have completed at least 29 credit hours with a 2.5 CGPA with NAU OR a combination of credit hours from other colleges/universities with a CGPA of 2.5; be currently enrolled as a fulltime undergraduate (12 hours or more) or graduate (nine hours or more) at the NAU Flagstaff campus and have cumulative 2.5 undergraduate GPA or a 3.0 graduate GPA; not be pregnant and/or have criminal record; must not be currently holding any other title at time of coronation as Miss Indian NAU and/or have previously held title of Miss Indian NAU; not be registered for active duty with military service; and be knowledgeable of Native American history, cultures, customs, and traditions.