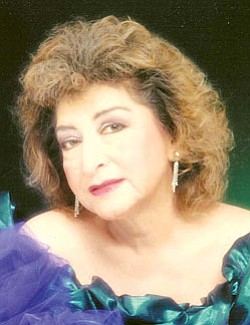 Winslow oldtimers will remember Amie as a waitress at the Grand Cafe and Entre Restaurant. In the 1950s and 1960s, she lived in a few southern California cities, and eventually purchased a home in San Bernardino where she lived with her husband, Joe Ulloa, four daughters and one son.

While her husband put in over 30 years with the railroad, Amie served the City of San Bernardino for 29 years, starting as a clerk typist and eventually rising to the mayor's office and finishing as secretary to the Director of the Parks and Recreation Department. Amie retired in 1998.

She was preceded in death by her mother, Lola Sanchez, father, Joseph Sanchez, sisters Rose, JoAnn and Helen and daughter Elaine. She is survived by her husband Joseph, daughters Kathy, Debbie and Josephine and son Tony from the San Bernardino area; sister Maria Villaescusa of Whittier, Calif.; sister Diane Wilkins of Ft. Lauderdale, Fla. and brother Jerry Sanchez who resides in Northern California.