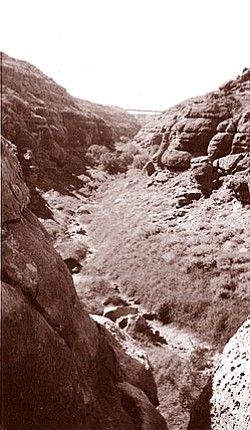 LEUPP-The Leupp Chapter House was once again the scene of controversy over water issues during the regular chapter meeting scheduled on Aug. 17. Actions during and after the meeting spurred C-Aquifer for Diné president Calvin Johnson to draft a press release on Aug. 22. In this release, Johnson charged Leupp Chapter officials of secretly conspiring to form a Canyon Diablo water deal, misconduct and ignoring Title II chapter governance laws in approving chapter resolutions. Further, he objected to being refused a copy of the resolution approving a well in the Canyon Diablo area-a resolution that had yet to be completed and signed by chapter officials.

Kelly objected to what she saw as very serious charges made by Johnson that officials are violating requirements from Title II, section 4028, specifically the language stating, "[a]ll resolutions approved by the chapter shall be set forth in writing and certified by the Chapter officials."

The press release continued with Johnson's protest, asking at one point if it was illegal to approve a resolution without it being written up to which Cody replied, "No, all you have to do is add the header and put in the rest of the info."

Both Kelly and Cody offered the exact same explanation in separate telephone conversations on Aug. 24.

"The way resolutions are done is that it is brought before the Chapter membership," Kelly said. "When it is presented, you know how people will say, 'I want this included in there.' They have conditions to be included before they will vote for the resolution. The resolution doesn't become official until everybody signs it-with all of its amendments."

"Some chapters only require the president to sign resolutions," Cody said. "Leupp Chapter has established a five-signature process that requires any resolution to be signed by the chapter president, the vice president, the secretary/treasurer, both chapter delegates and the grazing official."

Until all signatures have been affixed to a resolution-even though it has been voted in by the chapter membership-a resolution is not complete or official, Cody explained. The process of having all officials sign gives the community the security of ensuring the everyone's details, changes, or additions have been noted and included.

"Anyone can come into the administrative office and sign an official request for copies of minutes or resolutions-once they have been signed and filed," Cody continued. "Group members have also asked for copies of minutes at different meetings, but until they have been approved by the chapter membership at the following month's meeting, they are not official and cannot be released."

Cody attributes Johnson's actions to frustration at not being able to table the resolution on Aug. 17 since his request was not supported by the community.

Both Kelly and Cody scoff at Johnson's allegations that meetings are "secret," and have continued to demand that group members attend chapter planning meetings-something they rarely do.

Johnson, Kelly said, has asked for resolutions and minutes in the past, but he doesn't want to wait for the minutes to be accepted at the next scheduled meeting and signed, nor does he want to sign for copies of these.

"As everyone knows, Leupp Chapter is in the process of getting certified as a Five Management chapter. The Local Governance Support Center wants us to follow proper procedures in releasing documents such as minutes and resolutions. [Johnson] doesn't want to follow this procedure, and he says, 'Well, you aren't certified yet.' But this process is logical, and Leupp Chapter needs to get into the habit of following it.

"I feel like Johnson just doesn't want to understand or work with us," Kelly said. "I think that one thing that has fueled his jet, so to speak, is that at our last meeting, I noticed that he had a video camera sitting on a chair pointed right at us, and realized he was taping the meeting. I pointed this out to Lorraine Noline, and she asked me, 'Why is he taping us?'"

When she called attention to the camera and questioned Johnson's intent, Johnson pointed out that the meeting was a public meeting, and that he was within his right, Kelly said. She told him that it was true that this was a public meeting, but he should extend the courtesy to the chapter membership to explain why he was making the recording and that he was doing it, Kelly continued.

The C-Aquifer for Diné group voted against an MOU between Flagstaff and the Navajo Nation that would have limited the amount of water that the border town could have taken from the Red Gap Ranch-land that lay outside the reservation boundaries.

"Leupp Chapter residents were asking him, 'Why do you oppose this? It is in our favor to limit the amount of water Flagstaff can take from the C-aquifer.' People were asking him, 'What are your plans, what are your recommendations?' They had none to offer. The chapter has asked them to come up with a plan, and then we are told that it is our job."

There are a lot of people who want water within the Leupp Chapter boundaries, Kelly said, and she believes that it isn't right that the C-Aquifer group continue to hurt the people Johnson says he advocates for.

In a conversation with Johnson, also on Aug. 24, Johnson objected to Leupp Chapter officials telling Canyon Diablo people that the reason that the chapter is seeking to put in the standpipe is so that they don't have to haul water anymore.

"It is the same as at El Paso-people will still be hauling water."

Kelly clarified the chapter position in this matter.

"There are respectful ways to say things," Kelly concluded. "[Johnson] is slandering Leupp Chapter officials with some very serious allegations-that we as officials are taking kickbacks, that we are violating Navajo Nation rules. My challenge to him is this-why can't you find an outside entity to come in and investigate us?"