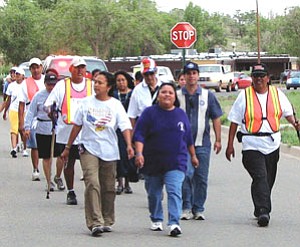 WINDOW ROCK-Democratic Arizona Congressional District 1 candidate Howard Shanker honored Native American Code Talkers at a recent ceremony in Window Rock on the Navajo Nation. Shanker, the son of a distinguished WWII veteran, spent National Code Talkers Day greeting many of the warriors and personally thanking them for their service to the country.

Navajo Code Talkers fought for the United States on the front lines in the most dangerous conditions during World War II. Serving at a time when the Navajo themselves had not yet been granted voting rights, the Code Talkers were integral members of the military, providing essential communications between front-line troops and command centers. The full-day celebration at the Navajo Code Talkers Memorial included the U.S. Marine Corps Band, traditional music and dancing, and speeches by dignitaries of the Navajo Nation and U.S. government.

Later in the day, Shanker walked with participants from "Walking the Healing Path," a walk across the Navajo Nation that promotes ending domestic violence through awareness and education. Shanker, a supporter of the cause, also met with "Healing Path" group members several weeks earlier, offering support, encouragement and handing out water bottles to participants as they passed by the Birdsprings Chapter House.

To learn more about Howard Shanker and upcoming events, go to www.HowardShankerForCongress.com or www.myspace.com/HowardShanker.

To learn more about the domestic violence walk visit www.walkingthehealingpath.org.