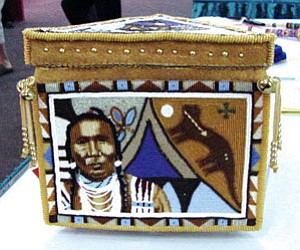 Showing the highly creative style of the traditional form of beadwork, this hide covered frame was done with tiny Czechoslovakian beads and had a realistic full face depiction as its subject (Photo by Rosanda Suetopka Thayer).

SANTA FE, N.M.-For the past 86 years, Santa Fe's Indian Market has brought together the most gifted Native American artists from all of the U.S. along with millions of visitors and collectors from around the world.

This year proved no different in providing a venue for world class traditional and non-traditional art forms and will yield for many artists a full year of monetary capital to produce and create more art.

There were more than 100 tribes featured this year with just over 1,200 artists in booths located all over the downtown plaza area. Buyers, collectors and gallery owners attend Indian Market every year to purchase artwork directly from the artists. It's also a rare opportunity for many collectors and buyers to meet the artists personally and to establish a longtime working and purchasing relationship.

This year's major winner for 2007 Best of Show was Dallin Maybee, a 6-foot-6 inch tall, 33 year-old artist who is also a law student from the Seneca and Northern Arapaho tribes.

Maybee's submission of two hide beaded and quilled ledgers complete with inside detailing of drawings, prose and trade blanket cloth were priced at $78,000 after his big win. This was Maybee's first entry at Indian Market and he walked away from the exclusive Friday night preview the biggest winner of the weekend.

Taught primarily by her mother, Helen, who is also a renowned potter, Rainy has since developed her own unique style faithfully replicating designs that her mother used on her pots based on ancient pottery shards found at Hopi's Awatovi ruins located near Keams Canyon on the Hopi Reservation.

Naha has exhibited in art markets and shows around the country and has already won several major art awards including this year's prestigious SWAIA fellow award.

Lecturing for institutions on ancient pottery and current trends, Naha has presented before such associations as Crow Canyon Archaeological Society, educating audiences on historically accurate Hopi art and culture.

With her SWAIA fellowship, Naha will purchase sheep manure, which is traditionally used as fuel for her pottery firing process and renovating her current studio facility at First Mesa.

Naha was very pleased in receiving the SWAIA award and hopes to set up a local art program for younger Hopi students at her home reservation to encourage their artistic interests.

Naha stated, "There is no better way to give thanks to the Creator and to my mother than to pass on the legacy of pottery creation to our children and grandchildren."

Judging for this year's market started at 6 a.m. on Friday morning, ending with the exclusive Friday evening Best of Show preview for members in the $250 membership category. It was standing room only with numerous press members in attendance.