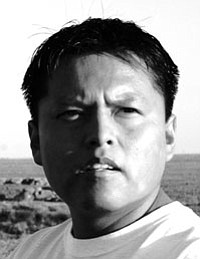 The C-Aquifer for Diné have been vocal for the past two years about not being informed about the actions taken on the local water plans, being left out of important meetings regarding the water issues, and they have received no response on their request for copies of minutes and resolutions and other information pertaining to their issue.

At the Aug. 17 Chapter meeting the inevitable came to a head with accusations against Johnson over a Chapter resolution on "Water Well Utilization in Canyon Diablo." Due to alleged lack of informing the Canyon Diablo community, Johnson motioned to table the resolution so community members could be educated first. However, the resolution passed. Johnson requested a copy of the resolution, but was informed by Cody-in the presence of Noline and Kelly-that the resolution was "not drafted" yet.

Johnson protested by saying, "Isn't it illegal to approve a resolution without it being written up?" Cody replied: "No, all you have to do is add the header and put in the rest of the info."

According to the Title II, section § 4028. E. all resolutions approved by the Chapter shall be set forth in writing and certified by the Chapter officials. Most Chapters of the Navajo Nation normally require their resolutions to be written and reviewed at the planning meeting prior to Chapter approval.

Reaction by the Leupp Chapter vice-president and Chapter secretary came with accusations toward Johnson of spreading rumors about Chapter officials and giving out misinformation about Chapter issues.

Johnson stated, "I'm only looking out for the best interest of the people. Speaking of misinformation, the Chapter conducts business without the peoples input or participation, which is unprofessional and demeaning to the people."

Thomas Cody stated that he had only four Chapter members opposing all the Chapter plans and asked Johnson if he wanted his job as Chapter president. Johnson said, "No, I don't want your job, but I will continue to voice concerns about issues important to the people, such as the east Canyon Diablo water issue."

For more information, read the related article (link below).