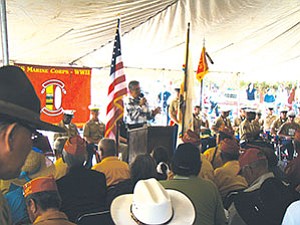 Navajo President Joe Shirley, Jr., tells hundreds of Navajos and the 24 Navajo Code Talkers being honored that “these young men” made sacrifices to defend their country while preserving their Navajo homeland and way of life during World War II. The event took place on the first official Navajo Code Talkers Day Celebration at Veterans Park in Window Rock on Aug. 14 (Photo by T.C. Tso).

WINDOW ROCK-Navajo Nation President Joe Shirley Jr., joined hundreds of Navajos and visitors from around the country to praise the service of the legendary Navajo Code Talkers, honor their sacrifices, and thank them for selflessly defending their country while preserving their Navajo homeland and way of life during World War II.

"These young men that are with us today used their language in a national defense of this country," President Shirley said, addressing the 24 Code Talkers in attendance, the youngest of whom is in his mid-70s. "Notice was given to the military that there was a language that could be used. This language was used and accomplished its task."

President Shirley was among a half dozen speakers to take the podium at Veterans Park to acknowledge the bravery and dedication of the Navajo Code Talkers on the first official Navajo Nation Code Talkers Day celebration.

While a similar celebration was held one year ago, it was not until December 2006 that the Navajo Nation created an official tribal holiday for Aug. 14 to honor and remember the Navajo Code Talkers in perpetuity.

"As leaders of this Nation, we support these efforts and declared this day a Navajo Nation holiday to keep this day for them," Shirley said. "Also, to include other veterans of all foreign conflicts from World War II, the Korean War, Viet Nam, Grenada, the Persian Gulf, Desert Storm and Iraqi Freedom."

"We want to address you as relatives, as soldiers, who have won our freedom," the President told the band members. "You are the reason why we have freedom in this land, including ... here on Navajoland. We just want to express our appreciation to each and every one of you. Thank you very much."

With the reading of names of the 10 Navajo Code Talkers who fell in battle in the South Pacific, and the names of those who passed away this year, followed by a moment of silence, a wreath was placed before the Navajo Code Talker statue in Veterans Park. Then, a member of the Marine Corps Band played "Taps," its soulful sound echoing from the Window Rock's sandstone walls.

Emcee for the formal portion of the agenda and event coordinator Michael Smith, son of Code Talker Samuel Smith, expressed his appreciation to the Navajo Nation for declaring a Navajo holiday on behalf of the Code Talkers "so that we can honor our own and pay our respects."

Keith Little, president of the Navajo Code Talkers Association, spoke of the honor and pride the Code Talkers feel now that they are in their elder years. As soldiers, through, they did what they had to do, he said.

"They did something that was never done," Mr. Little said. "I know that many of these people-all of us-had to go across the killing ground between the no-mans-land by the enemy and ourselves. So a lot of these men, they didn't know whether they were going to make it or not. No one can say Navajo Code Talkers were rear-echelon people."

Jean Whitehorse, secretary/treasurer of the Navajo Code Talkers Association, presented a brief history of the Code Talkers' experiences and the various recognition they are now receiving.

"Even though they did not have the right to vote, they wanted to serve their country," she said. "A lot times when they get interviewed, one question they get asked is, 'Why did you do that when the government did this and all that to you,' and they say, 'I'm not doing it for the government. I'm doing it for my Navajo people to keep my Navajoland safe.' So that was why they were there."

She said Arizona did not grant Native Americans the right to vote until 1945. New Mexico was next in 1948, followed by Utah in 1953.

Meanwhile, the Code Talkers served from 1942 until the end of the war in 1945 but kept both the code and their assignment secret, even from their families, for the next 23 years.

"The Department of Defense declassified the codes on Aug. 14, 1968," Ms. Whitehorse said. "All these years they were told not to talk about how they used the Navajo language, and they just kept it a secret. They never got their award that they deserved. They were just put on the side until 1968. Then they started getting their ribbons and their medals, but before that time a lot of them passed on."

In July 1982, President Reagan proclaimed Aug. 14, 1982, to be national Navajo Code Talker Day on the anniversary of the Japanese surrender to the U.S., she said. Code Talker John Brown was asked to make some remarks and one of the President's staff asked to look at his speech.

"And then they told him, 'You cannot say this right here.' What they didn't want him to say was that our Navajo language is older than your United States Constitution."

She said she traveled with some of the Code Talkers to the South Pacific battlegrounds during the filming of a documentary in October 2005.

"The people of Guam kept bowing to them," she said. "They kneeled down and were bowing to them and they were kissing their hands and saying, 'Thank you for liberating us.' That's how a lot of people across in those islands still remember the Code Talkers."

Among those who passed away in the past year are Joe Price, Steward Claw, Charles K. Guy, Sr., and David Tsosie.