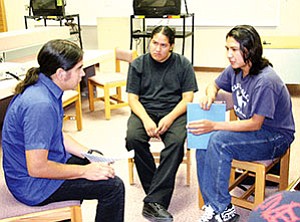 For the past seven years, the Grand Canyon Music Festival through its Native American Composer Apprenticeship Program (NACAP) has sought to develop musical literacy, and enhance critical thinking and decision making skills through the study of music composition.

The NACAP program was initially conceived in 2000 when Mohican composer Brent Michael Davids was the first composer-in-residence for the GCMF program and has followed with David Mallamud, Jerod Impichchaachaaha'Tate (Choctaw), Raven Chacon (Navajo/Hispanic) and Adam Overton.

Native high school students are able to work with these professional trained composers as an introduction into European classical music techniques to develop their own understanding of how to incorporate their own Native music heritage into a contemporary composition.

The NACAP program nurtures musical talents of Native high school students, which could prepare them for formal study at the college and conservatory level.

Chacon, originally from the Chinle area, has a master's of fine arts in music composition from CalArts in Valencia, Calif. and is serving as this year's NACAP composer-in-residence, working with students from Tuba City High School, Kayenta-Monument Valley High School, Greyhills Academy, Hopi High School and Chinle High School.

Chacon also holds a bachelor's in music from the University of New Mexico in Albuquerque and has worked as a performer, composer and recording artist in Europe, Canada and New Zealand.

Chacon has also toured the U.S. as a solo artist and lists musical commissions from such places as the National Museum of the American Indian in Washington, DC.

His musical work can be found on major independent labels, Innova and EMR. In addition, Chacon has been a visiting professor and composer-in-residence for the University of New Mexico who taught the first of its kind, Indigenous Experimental Performing Arts and American Indian Art History for graduate students.

Other accomplishments by Chacon include being a production assistant on the show "Monster Nation" featured on the Discovery Channel, which was a building of art and music inventions for the first season of this show.

Although Chacon is a young Native composer at age 29, he is old world-wise to "artistic discipline" and has much to say to his young apprentices during his two week residency.

"I believe it is important for these Native students to learn all modern musical languages and situations that they may find themselves placed in. I believe that every serious musician should understand musical notation and more importantly, the music of their Native family tradition. I think it's especially critical to work hard and not waste time watching television. Call up your band and practice, don't waste your money on junk, take your band on tour."

Chacon was originally interested in music and composition because he was always in bands as a young student himself and because he says, "we weren't very good at our instruments and the music just seemed to get noisier and noisier, but it was also getting more complex, but I knew I needed formal training to be more effective. I was inspired musically by my cheii (grandfather), heavy metal music and the Beatles."

"I would like to see the NACAP program continue to grow to include more schools, which will widen the composition experience for Native students all over the U.S."

For more information about the NACAP program at Tuba City High, call the Tuba City District Office of Public Relations at (928) 283-1185.